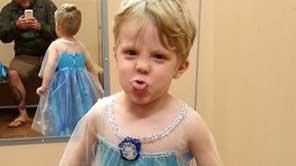 A Virginia dad is causing buzz online for his reaction to Halloween shopping with his son that some are calling "inspirational."

28-year-old Paul Henson took his son Caiden shopping for a costume. Little Caiden decided that he wanted to be Elsa from the Disney animated movie "Frozen."

After letting his son try on the costume, Henson took a picture and posted it to Facebook, along with a caption that has people talking and has now been shared thousands of times.

It reads: "Anyone that knows us, knows we generally let Caiden make his own choices, to an extent. Well, he has decided on a Halloween costume. He wants to be Elsa. He also wants me to be Anna. Game on. Keep your masculine bull**it and s****y kids costumes, Halloween is about children pretending to be their favorite characters. Just so happens, this week his is a princess."

In an interview with Buzzfeed, Henson said that his parents raised him to be himself and that's what he wants for his own son.