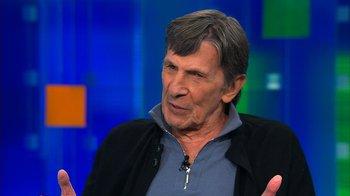 Here is a look at the life of actor and director Leonard Nimoy, famous for his portrayal of Mr. Spock on the television series, \"Star Trek.\"

Other Facts: Has been nominated for four Emmy awards.

Is the author of seven books of poetry.

Nimoy chose the Vulcan hand salute, which is based on a hand gesture used by Hebrew high priests when blessing the congregation.

Is an accomplished photographer, whose work is displayed in several museums.

1982- Appears in the television film \"A Woman Called Golda,\" and is nominated for an Emmy.