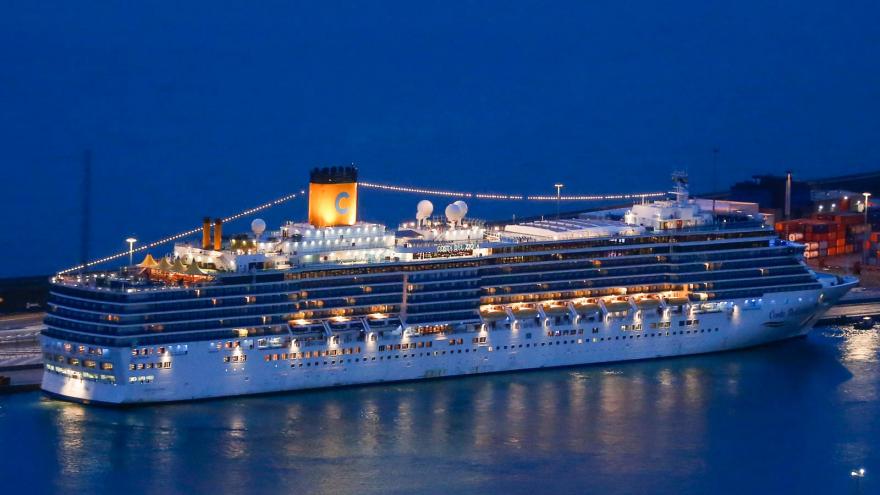 (CNN) -- A global scramble to bring cruise passengers home amid the coronavirus pandemic reached its endgame on Tuesday as the last ship at sea operated by a major company neared the Italian port of Genoa to disembark its passengers.

Prior to arriving in Genoa, Costa Deliziosa, which departed Venice on a round the world voyage on January 5, was identified by Cruise Lines International Association as the only one of its vessels still carrying a significant number of passengers.

The association, known as CLIA, is an umbrella organization covering 95% of all cruise ships, including those owned by the industry's largest operators.

Rough seas outside Genoa meant the Costa Deliziosa anchored just outside the port on Tuesday. It was expected to complete docking and begin disembarkation procedures the following day.

Costa Deliziosa's arrival in Genoa follows worldwide efforts by many cruise operators to bring their ships safely home and repatriate those on board, amid numerous outbreaks of the virus that have left the industry reeling.

Some ships have struggled to find safe harbor, with authorities at destinations turning them away because of fears the disease would spread. Other vessels have been subjected to controversial quarantines.

As of Tuesday, Costa Cruises said there were 1,519 passengers on board and 898 crew members on board the Deliziosa.

The vessel was originally due to return to Venice on April 26 after a 113-day voyage. The ship was cleared to keep sailing even after operator Costa Cruises -- an Italian subsidiary of the US-based Carnival Corporation -- suspended other sailings in March.

That decision followed CLIA's move to halt all operations from US ports as the coronavirus pandemic worsened and outbreaks were reported on several vessels.

Although the Costa Deliziosa has continued to sail around the world, prior to this week no one had left the ship in more than a month.

Some passengers disembarked and traveled home when the ship stopped off in Perth, Australia on March 16. The only passengers allowed to step ashore were those with booked flights.

The ship docked in Barcelona on April 20 where 183 Spanish and Portuguese passengers left the ship and 112 French guests, the cruise line said.

The remaining passengers, including Americans, Italians and some French citizens, are expected to leave the ship in Genoa.

Among them, US passenger Dana Lindberg told CNN Travel she was unsure what would happen when the ship arrived.

"I still have no idea what that means for me getting back to the USA," she said on Monday. "I don't know if we stay on the ship waiting for a flight, go to hotel, or if a flight will be offered on Wednesday."

The cruise line said on Tuesday that it had "organized transportation to the various countries of residence."

Lindberg said her voyage on the Costa Deliziosa was a "once in a lifetime trip" that she'd had planned since early 2018.

Boarding the world cruise in January, Lindberg did not consider that the itinerary would be impacted. It was only in February, as Covid-19 fears ramped up, that the ship revised its voyage to avoid Asia.

There are no reports of Covid-19 on board. Those on board were briefly quarantined to their rooms after a passenger left the ship in Sicily for health reasons, but the quarantine was lifted after this passenger tested negative for Covid-19.

MSC Magnifica disembarked its passengers in Marseille, France, ending a world voyage that also began back in January but has, since March 10, only involved stops to take on fuel and provisions.

There were no cases of Covid-19 on board.

"I think it is safe to say that this is an unprecedented situation and I am not sure that anyone has experienced anything like this before," said Magnifica's captain, Roberto Leotta, in a statement.

"But the trip has not been dramatic at all. Our guests are very happy. They have always been safe, and they have received the same service as on a normal cruise."

Leotta described the crew and passengers on board as a "big family."

In the US, the Pacific Princess arrived in Los Angeles on April 20 after setting sail on a 111-day world cruise back in January.

Most of its passengers had returned home to the United States after disembarking in Australia on or around March 21. Only passengers who couldn't fly due to medical reasons remained on board the ship.

Princess Cruises says there were 119 passengers on board and no known cases of Covid-19.

While most cruise ship passengers have now disembarked, many crew members remain on vessels across the world, either quarantining or manning the ships until cruising starts up again

While Deliziosa is the last CLIA ship to arrive at port, there's one more cruise ship with a handful of passengers on board that's yet to dock.

Pheonix Reisen cruise ship Artania is currently traveling back to Germany with eight guests, according to the cruise line.

The Artania cruise ship set sail on a 140-day world cruise from Hamburg, Germany, to Bremerhaven, Germany, on December 21, 2019.

Some 36 passengers tested positive for Covid-19 following a check from Australian health officials upon the Artania's arrival in Fremantle, Western Australia.

In a statement, Phoenix Reisen said these passengers were subsequently disembarked and quarantined in local hospitals.

Another passenger disembarked and tested positive for coronavirus earlier in the voyage.

Three people who were on the ship have since died -- two male passengers and one male crew member.

Healthy passengers stayed on board the ship until their repatriation flights, which took place on March 29. The majority of passengers on board were from Germany.

The Artania was quarantined in Fremantle for 14 days before it was granted permission to leave Australia on April 18. It's now traveling back to Germany via Southeast Asia. It's due to stop at Bali on April 23 and Manila on April 28 in order to drop some crew members home.

The eight passengers on board the Artania chose to travel back by sea due to health reasons.