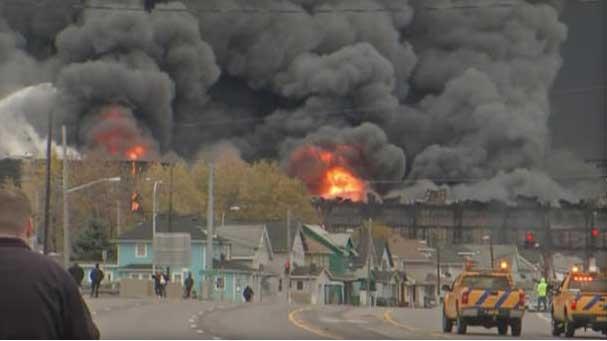 Firefighters responded around 7:30 a.m. Wednesday to reports of a fire at the industrial site in the city of Lackawanna, just south of Buffalo.

CBS Buffalo affiliate WIVB reports explosions have been heard coming from a burning building on the property located along the Lake Erie shoreline. Erie County Legislator Lynn Dixon says the building belongs to a mulching company. No injuries have been reported.

Television news footage shows a large building engulfed in flames as massive clouds of black smoke billow away from nearby homes, and video images show the roof of the building collapsing around 8:30 in the morning.

Workers at nearby buildings are being told to head home.

Bethlehem Steel operated its sprawling Lackawanna for decades before ending operations in the 1980s. The property is now home to an industrial park that includes a Republic Steel manufacturing plant.