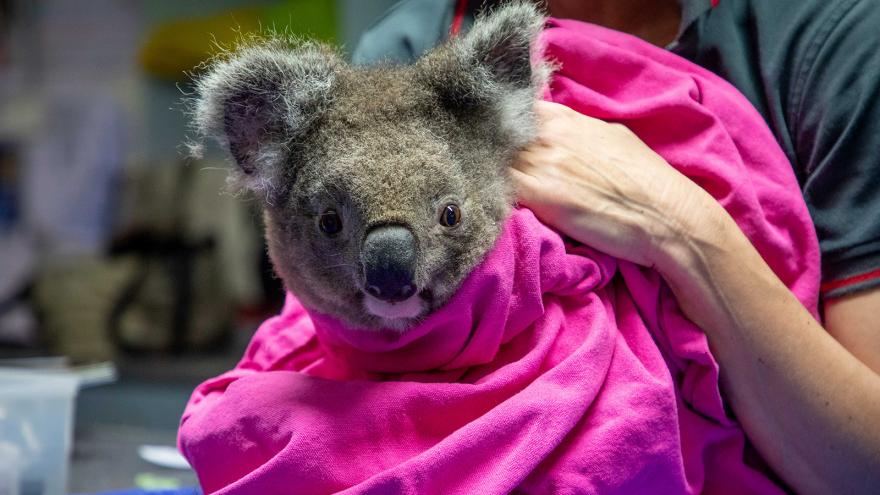 (CNN) -- In a spot of good news, several koalas who were injured in bushfires in Australia in 2019 have been re-released into the wild.

The marsupials were being treated at the world's only all-koala hospital, located in the New South Wales town of Port Macquarie.

One of the most famous of the group is Anwen, a female whose photos went viral due to the severe nature of her burns -- they covered 90% of her body.

She was the third patient admitted to the Port Macquarie Koala Hospital in October 2019.

Now, though, she is joining several other koalas who have been resettled at the Lake Innes Nature Reserve in New South Wales, which is on the state's Tasman Sea coast some 235 km (146 miles) north of Newcastle.

Anwen is one of 26 koalas to be returned to their habitat over the course of a week. Hospital employees carefully considered a mix of koala ages and sexes in order to make for a well-rounded community -- especially since they hope the animals will breed and grow their population in the wild.

But it wasn't only the koalas who had to rest up and heal. Though the Lake Innes area was badly damaged in the fires, higher-than-expected amounts of rainfall made it possible to release the animals sooner than planned.

"While we are all facing difficult and uncertain times, this incredible story of hope serves as a reminder of the resilience of our incredible flora and fauna and people," Phillipa Harrison, Managing Director of Tourism Australia, said in a statement.

And for a country battered first by natural disasters and then by the effects of the worldwide Covid-19 pandemic, Australia is happy to have some positive news to share.

Tourists aren't heading to Australia at present, but there are still ways to support the koalas from home, namely the hospital's adopt-a-koala online program.

Tourism Australia has also set up an online portal stocked with virtual tours, custom Zoom backgrounds and a vacation planner.