That accomplishment has earned him a place in their “Thanks a Million” Club, and it’s his own family’s experience with his little sister, Aubrey, that inspired him to help.

To look at 5-year-old Aubrey Merfeld jumping on a trampoline now, you’d never know how her life started out. Her mom, Lisa, actually wishes they would have known.

“I always say, if we would have just had a crystal ball to see the future back then, it would have been so helpful,” Lisa Merfeld said.

It would have been a relief to know their baby was going to be OK. Aubrey was born with a heart defect that required surgery.

“So when she was two weeks old, she had her first open heart surgery,” Merfeld said.

Aubrey received care at Advocate Children’s Hospital, which was more than an hour and a half from the Merfeld’s Kenosha County home.

“We were commuting back and forth, one parent at a time,” she said. “We were living in a hotel that we didn't have the money for because we were both off of work.”

But then came the call from the Ronald McDonald House that changed everything.

“When we got the call that we'd got a room, it was like the biggest relief ever,” Merfeld said.

The family spent 43 days at the Ronald McDonald House in Oak Lawn, IL. Nolan, who was just five at the time, was intrigued by a tree painted on the wall at the house. People who've collected a million pop tabs get their names on a leaf on the tree.

Five years later, he has a lot of experience collecting pop tops. Sifting through a huge garbage can filled with them, he said putting them in containers or ziplock bags is the best way to transport them.

He started his collection when they got back to Wisconsin. He made his own containers to put on the counter at family businesses.

“I made my own, out of cups and I put pictures on them,” Nolan explained.

On the cup, it says “pop tops for my sister.” There’s a cup that’s been at his grandfather, Merrill Merfeld’s, Kenosha collision shop for five years. It shows a picture of baby Aubrey.

“I mean, I have a whole bunch in the other room,” Merrill Merfeld said with a laugh as he started pulling huge bags of tabs out of the cupboards.

With the collection cups out in the community, the pop tops started rolling in.

“People I don't even know, I'll come back from lunch or come in the office from going somewhere and there'll be a bag of tabs on the counter,” Merrill said.

Nolan has also collected from the restaurant, Twisted Cuisine, where his uncle is a manager. 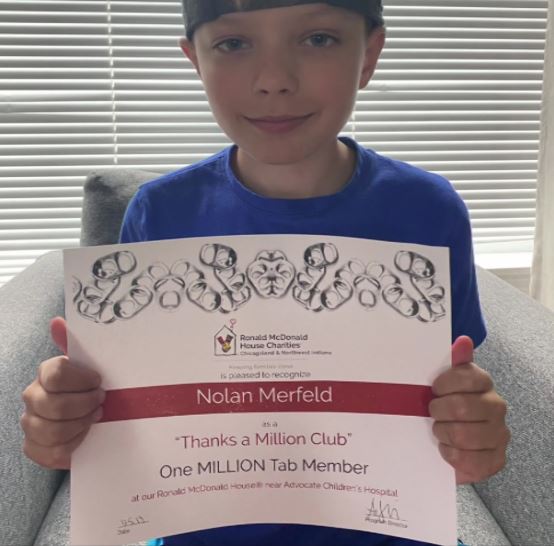 Every year, the family donates hundreds of pounds of tabs to the Ronald McDonald House. The containers are so heavy, they load them up on top of his dad’s skateboard to wheel them in. Lisa Merfeld said it took Nolan three years to reach one million tabs.

And that earned him a membership in the “Thanks a Million” Club. His name is now on a leaf on that tree in Oak Lawn.

“He had to come up with a quote. A little quote to put on it and everything,” Lisa said with pride.

Program director Anne Czarnecki said the money they get from recycling the tabs helps pay for services so Ronald McDonald House Charities of Chicagoland and Northwest Indiana can help more families.

“And people like Nolan who are pulling for his little sister, make all the difference,” Czarnecki said.

She said the pop tab program has raised more than half a million dollars for the homes in Chicagoland and Northwest Indiana since 2005.

“You don't have to be a million dollar donor, you can be a million tab donor and we'll take it,” Czarnecki said with a laugh.

Nolan is now on his way to two million tabs, and he doesn’t plan on stopping any time soon. When asked his goal, he said, “To beat the Guinness World Record.”

To donate to Nolan’s pop tab collection, you can drop them off at: