Kaine to Campaign in Milwaukee, Trump in Green Bay 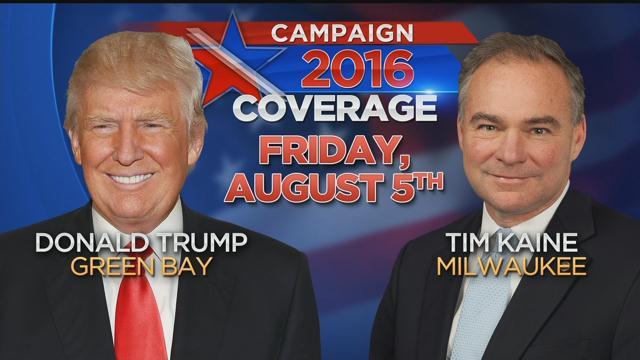 Friday will be a busy day for politics in Wisconsin, Democratic Vice Presidential Nominee Tim Kaine will appear in Milwaukee for a campaign event at the Lakefront Brewery.

This will mark the first Wisconsin stop for Kaine.

Indications are he will address Hillary Clinton's economic policies, in particular job creation.

The event is scheduled to begin at 1 p.m.

On the same day Republican Presidential Candidate Donald Trump is expected in Green Bay with his running mate Mike Pence.

Trump continues to draw criticism from fellow Republicans for refusing to endorse John McCain and Paul Ryan in their primary races.

In the past Trump has said he didn't want to get involved in primaries and Ryan was slow to endorse Trump and has criticized some of Trump's statements.

"It's hard to disagree with the fact that Ryan's efforts to undermine the Republican nominee, whom he pretends to have endorsed, is exactly the kind of two-faced dishonest politics that represents what's wrong with Washington today," said Nehlen.

CBS 58 is gathering reaction from the Ryan campaign and will have the latest tonight on the CBS 58 News at 10.