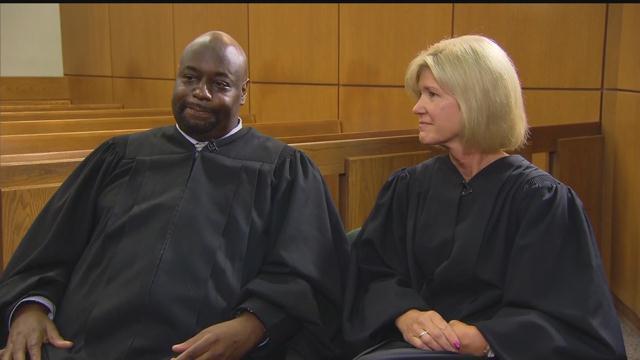 There were plenty of hugs to greet 46-year-old Mosley as he retook the bench Monday for the first time since the surgery.

“It’s good to be back, let’s do some business,” Mosley said.

He had one person to thank -- 58-year-old Judge Eiring.

“I have a part of my best friend in me, that I feel, that I can actually touch, inside of me that keeps me alive,” Mosley said.

In 2014, it became clear Mosley’s kidneys were failing. Doctors diagnosed him with end-stage renal disease.

“I was on daily dialysis. I did it for 10 hours a day, every day of the week,” Mosley said.

Doctors told Mosley he would get a kidney donation soon. But “soon” meant five to six years.

The need is especially great among African-Americans, who make up 13 percent of the population but account for more than a third of all patients waiting for kidneys.

Eiring didn’t want her friend to suffer through such a long wait, so she stepped up to see if she was a match.

“I would like to think you would do whatever they can for their friends,” Eiring said. “I don’t feel like I’m a hero. This is who I am and this is how I was brought up.”

Turns out Eiring, who is half of Mosley’s size, had kidneys that were a perfect fit -- another reminder that it’s not about what’s on the outside, but on the inside.

“I had joked along to the doctors. I said don’t be fooled by my size. I have big feet, big bones, I’m pretty sure I have big organs,” Eiring said. “It was just kind of a joke we all had.”

“And it was a huge kidney,” Mosley said, laughing.

Doctors at the Froedtert & the Medical College of Wisconsin transplanted that kidney last month. It’s already allowing Mosley to spend more time with his two daughters and wife, while deepening his friendship with his fellow judge.

“We’re family. We all get caught up in the fact that some people don’t associate with other people because of their race or what happened, but when it comes down to it, inside we’re all the same,” Mosley said. “One heart, two lungs, two kidneys. The more you learn, the more you grow as a person. That’s the diversity that makes us great. And I think we just need to embrace that more.”

Judge Mosley said both his father and grandmother were diagnosed with the same disease. Now that he has a new kidney, he said he expects his friend, Judge Eiring, to keep a close eye on his diet at work to make sure her kidney -- now his -- stays healthy.