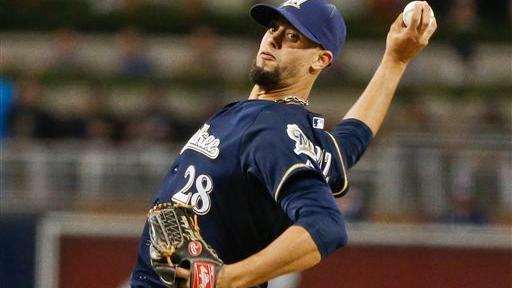 Just weeks ago, Jorge Lopez was on the mound in Biloxi, Mississippi, pitching for the Double-A Shuckers, not sure when he would get his big break. Well, the call came, and on Tuesday night, Lopez struck out seven and picked up a big league win, leading the Brewers past the San Diego Padres 4-3.

The Brewers gave Lopez some immediate run support, as Adam Lind singled in the game's first run in the top of the 1st inning, and was followed up by an RBI double by Jean Segura to give the Brewers a 2-0 lead. San Diego rallied to plate three runs and take a 3-2 lead after four innings, but Segura delivered the game-winning hit, a two-run homer in the 6th.

Lopez retired the first five batters he faced and ended up giving up 3 runs on 8 hits over 5 innings, striking out 7 and walking 2. Francisco Rodriguez recorded his 38th save of the year, sealing the deal in the 9th. The Brewers continue their three-game set in San Diego on Wednesday night. Zach Davies (2-2, 4.67) faces San Diego's Andrew Cashner (6-15, 4.21). First pitch at Petco Park is slated for 9:10 p.m. central.