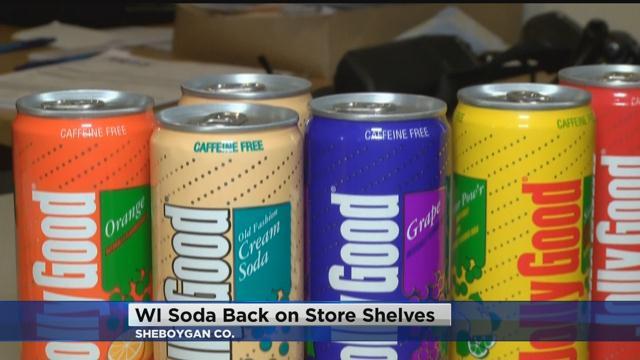 When the news it Facebook it hit people right in their most nostalgic parts.

Jolly Good, the once defunct Wisconsin soda brand, is back in select stores.

Customers are driving in some cases hours to get their hands on it. Right now its only sold in the Random Lake area near the village where it's made.

It was a busy Wednesday at Tri-Par Oil Company which is one of about only four spots selling Jolly Good. The sales have been almost secretive for the past eight or so months.

But now that the news is out thanks to an article published by the Sheboygan Press, workers at the gas station say people from as far away as Illinois have made stops - leaving with cases of what they might call 'childhood in a can'.

"We've been looking for jolly good for a long time. he really likes the cherry soda," Gayle Rottler, who drove up from Grafton specifically for Jolly Good, said.

"This was full this morning," Tri-Par Oil Company Manager Bob Norskog said. "And we've had a surge of customers coming in and they're just taking cases at a time."

The fastest sellers are cherry, grape, and of course...

"Cream won in a landslide [in a Facebook poll] So that tells me a lot of people remember of cream flavor. It's a good flavor," John Rassel, owner of Krier Foods, said.

Krier Foods has been working to bring back the brand since 2014. It came off store shelves about 10 years before, Rassel said.

"We quietly withdrew it from the market for two reasons. One - price competition. The larger brands, the national brands, were squeezing out the competition," Rassel said.

The second reason was that Krier Foods had other business and contract they could lean on, Rassel said.

Soon all 51 of their flavors were fizzed out.

"I don't know if people noticed that it was gone," Rassel said.

But people are noticing the comeback. Jolly Good was a trending topic on Facebook among Wisconsin users. The soda is made with the same formula but served from thinner taller cans.

"Our employees take a lot of pride in all the products that we make. But there's a special kind of pride when its your own product. And our employees really feed off that. They really enjoy it," Rassel said.

At Tri-Par Oil Company Jolly Good is being sold for $12.99 a case which is a little more expensive than some other brands.

The clerks say it's important to remember that the sodas are actually made with real sugar...and are also small-batch.