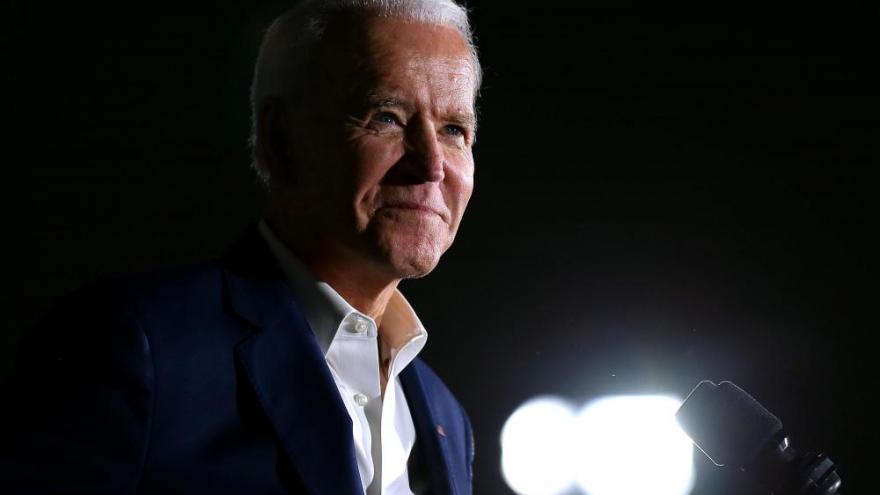 Joe Biden's search for a running mate is unlike any other in recent history.

(CNN) -- Joe Biden's search for a running mate is unlike any other in recent history.

The presumptive Democratic nominee committed to selecting a woman to serve as his vice president in an unprecedented announcement during the final Democratic debate last month. Since then, Biden has turned the typically private search into a public endeavor, using his campaign's newly minted podcast as a way to highlight the women he is considering for the job and openly talking to voters, reporters and donors about what he is looking for in a running mate and who he is actively considering.

The latest example came Monday, when Biden told a local television station in Pittsburgh when asked about former first lady Michelle Obama as a potential running mate that he would take her "in a heartbeat" if she would accept it.

"I'd take her in a heartbeat," Biden said on Monday, adding that while Obama is "brilliant" and a "really fine woman," he doesn't think she "has any desire to live near the White House again."

Biden's search for a vice president, a dozen years after he was the focus of then-Sen. Barack Obama's search, is expected to dominate the next two months of his campaign, especially now that the bulk of top Democrats, including Vermont Sen. Bernie Sanders and Obama, have endorsed Biden's candidacy.

The campaign will announce its formal vetting operation by the end of this month, but the process of selecting a vice presidential candidate to join the ticket is well underway. It is taking place in a world consumed by the spread of the coronavirus, a pandemic that has, for now, delayed the traditional in-person interactions with possible running mates meant to test chemistry and clandestine visits for face-to-face interviews.

The campaign is expected to announce the team that will conduct the formal vetting of the contenders soon. The campaign's top lawyers, Bob Bauer and Dana Remus, are expected to be part of the process, along with a number of top advisers.

In preparation for launching the vetting operation, Biden's team has spoken with former Attorney General Eric Holder to discuss how he ran Obama's 2008 search, a source familiar with the outreach said.

Biden has not set a timetable for announcing his vice presidential pick but recently told donors there has been a discussion within his campaign about naming his running mate well before the "usual time" of just prior to the convention, which was originally scheduled for July and is now pushed back to August.

Countless factors will go into Biden's pick, including how the coronavirus pandemic has impacted what voters want in a presidential ticket. There are also practical concerns that hinge on key voting blocs for Biden in November, namely African American voters who propelled his primary campaign and suburban voters who helped Democrats take back the House in 2018. And with states like Michigan and Wisconsin as battlegrounds in 2020, the appeal of picking a Midwesterner will also weigh on the decision.

Biden, who values cultivating one-on-one connections with those he meets, has said he's looking for a running mate who is ready to be president at a "moment's notice" and someone with whom he is "simpatico" -- suggesting his personal relationship with his future partner will be key.

"I learned from the best -- Barack Obama -- on what to look for," Biden wrote on Monday in a campaign newsletter. "When it comes to the Vice Presidency, I'm looking for someone to be a partner in progress. Someone who's simpatico in how they see the challenges the country faces. Someone who is ready to be President at a moment's notice."

Holed up at his home in Wilmington, Delaware, Biden has stayed in regular contact with a number of women who likely will come under consideration. He's openly mentioned his conversations with Minnesota Sen. Amy Klobuchar, Massachusetts Sen. Elizabeth Warren and Michigan Gov. Gretchen Whitmer. Biden also speaks frequently with California Sen. Kamala Harris, a source familiar with the conversations said.

As she rose in prominence after direct clashes with President Trump while leading her state's coronavirus response, Whitmer appeared on Biden's podcast -- just days after he revealed she made his list of possible running mates a few months prior.

Biden spoke about his "partnership" with Harris at a virtual fundraiser featuring both Democrats a few days later, telling the California senator, "I'm coming for you, kid."

"I'm so lucky to have you be a part of this partnership going forward," Biden said. "Working together, we can make a great deal of progress. ... I'm coming for you, kid."

And Biden has repeatedly responded to questions from reporters and donors about the process, something that past nominees have tried to dodge.

The women Biden is considering have reflected that public posture, too, with many openly discussing their desire for the job, throwing out the traditional coyness prospective candidates usually employ.

Abrams, the 2018 Georgia gubernatorial nominee, directly said earlier this month that she would be an "excellent running mate" and later gamed out how she would hypothetically debate Vice President Mike Pence.

Warren, asked directly if she would take the job, said yes. And Harris has said she would be "honored" to be selected.

Only Klobuchar, who was Biden's latest podcast guest and is slated to headline three virtual fundraisers for the presumptive Democratic nominee, has truly played coy.

Christina Reynolds, a top strategist for Emily's List, a Democratic organization focused on electing more women, said Biden's decision to pick a woman running mate is a reflection that women are "more than half this country, far more than half the voters, and we have never had a woman in that role."

"For so many years, we didn't ask women to run for these jobs," Reynolds said. "There is something powerful to these women saying, 'I am not going to wait for people to come to me, I am going to acknowledge what I believe to be true, which is that I can do that job.'"

Biden is in the early stages of setting up his transition team and told donors he has not ruled out announcing potential Cabinet members before November's election.

The thinking here is simple: If Democrats know more about who is going to be in a Biden administration, they may be more excited to vote for Biden in November.

And that starts by choosing the woman who will join him on the Democratic ticket.

"I think you have to have a running mate that complements the ticket," said House Majority Whip Jim Clyburn of South Carolina, whose endorsement launched Biden to a decisive victory in his state's critical contest. "Opposites attract might come to play in this."

Though Clyburn hasn't directly counseled the former vice president about his pick, he is among those who would like to see Biden select an African American woman as his partner.

"I had made it very clear that I support that. Being the father of three African American women, I would naturally favor an African American woman as being his choice," Clyburn said. "I'm not telling anybody that that's anything that I think must be. I just think that's what I favor."

The decision is a personal one for Biden, who went through the process a dozen years ago and, according to friends and advisers, is looking for a running mate to offer him the same kind of loyal counsel that he offered former President Obama.

Biden has solicited Obama's advice during the search. The former vice president told donors earlier this month that he spoke to the former president about his choices, adding that he is going to "need a woman vice president who has the capacity, has strengths where I have weaknesses."

Along with Biden, former Indiana Sen. Evan Bayh was among those who made it to the final round of the vetting process to be Obama's running mate in 2008.

"In many ways, it's more intensive than the presidential nominee him or herself," Bayh said. "Look, Donald Trump has never turned over his tax returns to anyone. But the VP nominee does."

After filling out an extensive questionnaire touching on everything from personal finances to health and even anything that might embarrass the contender or the nominee, those under consideration went through interviews with the vetting team and top advisers before speaking with the candidate directly. That meeting is always highly choreographed to maintain as much secrecy as possible.

"I walked out of the Russell Senate office building to Union Station, got in a car with tinted windows, got in a chartered plane," Bayh said recounting his 2008 meeting with Obama in St. Louis, Missouri. "They took me up the freight elevator so no one would see me entering the hotel. They did their best to maintain the confidentiality."

Bayh said the process can be intense and highlight issues that many public figures don't want known.

"My strong advice," Bayh said, "if there's anything you don't want to have made public, don't do it. That would be foolish."