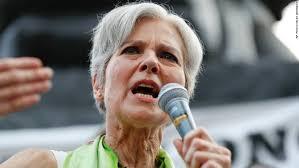 The Stein campaign said it needed to raise over $2 million by Friday to pay for recounts. That goal was reached by early Thursday morning, and the campaign has now increased the target to $4.5 million.

"Over the last 48-72 hours, reports have come in from experts, cyberexperts, who are reporting to us some very troubling news about the possibility of security breaches in voting results across this country," Stein campaign manager David Cobb said in a video posted to Stein's Facebook page Wednesday afternoon.Stein and others are seeking an audit and recount of the November 8 voting results in Michigan, Pennsylvania and Wisconsin, following reports that voting security experts alerted Hillary Clinton's campaign to the possibility of hacks in key counties in those states.

President-elect Donald Trump claimed Pennsylvania and Wisconsin -- wins that helped push him comfortably over the threshold of 270 Electoral College votes needed for victory -- while Michigan remains too close to call, more than two weeks after Election Day.

While the loss of those states played a large part in Clinton's downfall, her lead in the popular vote has continued to grow. She now has close to 2 million more votes than Trump -- and pressure has been mounting among liberals for an investigation into what happened on Election Day.

"Demand an audit. Make the call," filmmaker Joss Whedon tweeted late Tuesday, with a picture of Clinton reading "She Won."It's an ironic twist from just a month ago, when Trump was cautioning that the election results would be "rigged" and that he may not accept the outcome.

Stein, who ran as an independent, third-party candidate in 2012 and 2016, does not stand to benefit personally from the proposed recounts -- she received only 1.1% of the vote in Wisconsin and less than 1% in Pennsylvania.

She launched her effort after computer scientists reportedly told Clinton campaign officials that the election may have indeed been rigged -- in Trump's favor.

However, her website said the recount attempt was "not intended to help Hillary Clinton," adding: "These recounts are part of an election integrity movement to attempt to shine a light on just how untrustworthy the U.S. election system is."The group of voting scientists -- including University of Michigan's J. Alex Halderman and voting rights activist John Bonifaz -- alerted the campaign that Clinton's tallies fell 7% shy of expectations in counties that used electronic voting machines.

Clinton fell about 27,000 votes shy of Trump in Wisconsin and 60,000 in Pennsylvania -- razor-thin margins in both states, which together account for 30 Electoral College votes. Votes still are being tallied in Michigan, which CNN has not called for either candidate yet.

However, famed political statistician Nate Silver was skeptical, tweeting that the voting patterns reportedly questioned by computer scientists "are well-explained by demographics -- not hacking."An analysis published on Silver's FiveThirtyEight website said that the hacking claim "doesn't check out" statistically and that there was "no clear evidence that the voting method used in a county -- by machine or by paper -- had an effect on the vote."

The Clinton campaign has yet to return requests for comment on the reports. Halderman did not return CNN's calls for comment Wednesday and his voicemail was full when a reporter attempted to contact him.

"A realistic attack on the election is probably going to be honing in on whichever state ends up having the closest margin," Halderman said in an interview on C-SPAN one month before the election.

Halderman is well-known in election security circles and gained some fame after he and his students at the University of Michigan successfully hacked Washington's Board of Elections in 2010 during a trial run of its online voting system.

People who voted using the system were greeted with the University of Michigan's fight song -- placed there by Halderman's students. The city council quickly scrapped plans for the system after that.