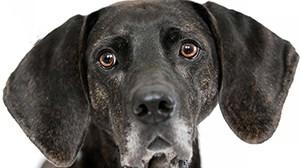 Jerry is a 6-year-old Plott Hound available for adoption at the Wisconsin Humane Society Milwaukee Campus, and boy is he a sweetie. This handsome pooch is very affectionate and gentle, especially around young children. His hobbies include snacking on hot dogs, playing with stuffed animals, and lounging in his crate after a long walk. Jerry admits to being a bit of a counter surfer, but once he gets a whiff of something tasty with that Hound nose, it’s hard to resist standing up on his long legs to sneak a peek. He promises to work on that with a little help from his new guardian.

It'd be a perk if his future home had a tall fence (Jerry is a talented hurdler of the lower 4' fences) with room for him to romp, but more importantly, Jerry needs a family who is active and would love to take him for routine walks, runs, or hikes. Most of all, Jerry simply needs someone to love who will love him right back... Even though he weighs 63lbs, he thinks he's a lap dog and loves to be at your side, politely requesting scratches behind his giant ears. He really is a fantastic boy.

Despite his charming demeanor and good looks, Jerry hasn’t found his forever home – he’s become a benchwarmer. His fee has been entirely waived and he's just waiting for a hero to take him home. Could you be his perfect match? Learn more about Jerry here!