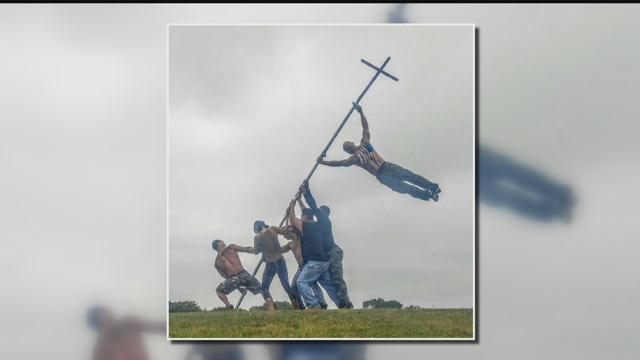 The bravery of his fellow comrades is not lost on John Dumas, who served in the Marines for five years, with two tours in Vietnam.

"6,821 men were killed at Iwo Jima," he said. "More than any other battle that the Marine Corps has fought."

It's why an historic moment in time hits home. On an iconic day in 1945, six Marines raised the U.S. flag on Iwo Jima.

"There was no mindset for fame or glory," said Marine veteran Nicholas Jensen. "They were doing what they felt they needed to do to raise camaraderie and inspire."

It's inspired a 70-year tradition in Racine, where a group of Marine vets re-enact Iwo Jima on a parade float. Each person plays the role of an original flag raiser and given a dog tag.

"To each individual I say five words, remember why we do this because we don't do it for us. We're doing it for them," Dumas said.

A bodybuilding team in Racine created their own interpretation in honor of those who fight for freedom.

"[It] Touched a lot of people's hearts," said participant Alexander Ersing. "A lot of thank you's."

"It's not that they're doing something wrong, but more of having an understanding of how to do it and portray it correctly," Jensen said.

"I didn't mean anything disrespectful," said Ersing. "My full support is for the men and women that fight for us."

Ersing apologizes if anyone felt offended, but said most feedback has been overwhelmingly positive.

"It hit exactly where I was trying to," he said.

The Marine veterans organization takes its Iwo Jima tribute float on the road to educate others. It's next event will be the Zion Jubilee Days Parade in Zion, Illinois on September 5.