"It's One More Step Closer to a Reality to get Our Nation's Heroes off the Streets:" First Tiny Homes in Racine Put in Place 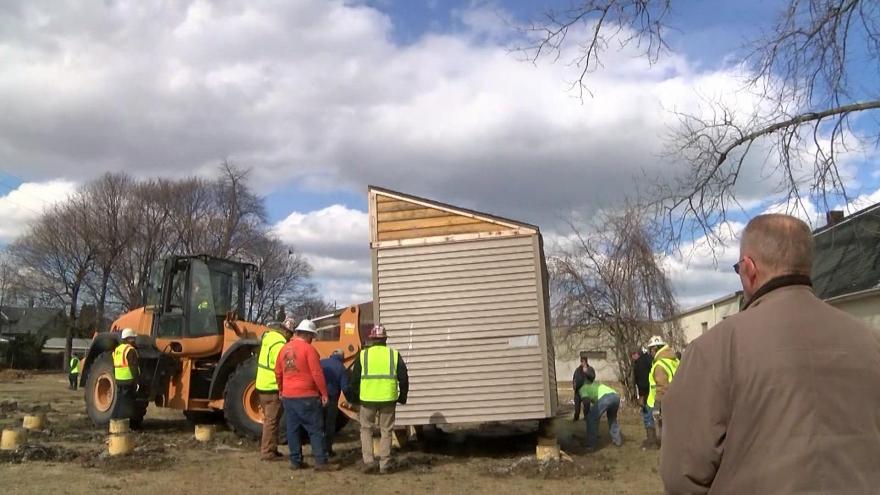 RACINE - A project that will help put a roof over the heads of homeless veterans took a big step forward today. The first tiny homes were put in place.

The tiny homes are 128 square feet and the organization plans to build 15 of them. The inside has a bed and a couch and today was a big step in the project. They placed the first tiny home on its foundation.

"This is beyond exciting to get to this point, there are so many hours of work and so many people involved," said Jeff Gustin, the Director of Veterans Outreach of Wisconsin.

Most of the work is volunteer. Once complete, homeless veterans will get a roof over their head.

"I don't even know what to say to be honest with you, it's just that overwhelming of a feeling. It's one more step closer to a reality to get our nation's heroes off the streets."

The Veterans Village will be a temporary home while the veterans receive the tools and help they need to get back on their feet.

"As long as they are making positive strides toward the end goal, which is financial security and their own permanent, affordable housing we are going to work as long and as hard as we can to make that happen."

Fellow veterans are proud to see this village come to fruition.

"I think it's a great idea! It's one of a kind. Our veterans dedicate their time to serve our country and sacrifice a lot sometimes by leaving families behind, they come home and sometimes they don't have a job, and sometimes they are homeless and it's tough," said Ali Nelson who is retired from the U.S. Navy.

This first step was an emotional moment for people behind the project.

"We've worked very hard with the help of the community, a lot of help from the city of Racine. It's been a year in the making to get to the point where that house is setting on its own foundation where it will be permanently."

For those that will live here, there will be a community center with laundry, kitchen, bathrooms, help with finances and work