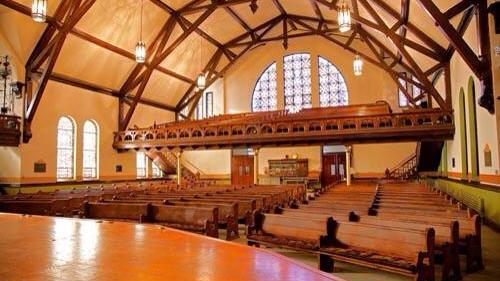 The Irish Cultural and Heritage Center at 2133 W. Wisconsin Avenue is celebrating the recent completion of renovations to its grand or great hall called the \"Hallamor\" in the Irish language.

They held a special \"Spirit of Home\" event where supporters sampled some of the finest Irish whiskeys, plus wine and beer tasting.

Music and laughter filled the air as the countless volunteers were congratulated for a job well done.

The huge impressive interior of what used to be the Grand Avenue Congregational church had to be completely repainted and re-plastered.

An artist was brought in to do special Celtic paintings that now line the walls.

The renovation began in earnest some two years ago and includes a revamped sound control booth for the various musical acts that come to Milwaukee to perform here because of its renowned acoustics.

Longtime ICHC member Peter Fleming remembers when the building was first purchased for $1 by the Irish community.

\"The leaks were so bad. There was one we called the waterfall.\"

Fleming who is retired from the Milwaukee Police Department now plays St. Patrick's in the annual parade. \"The blessings of St Patrick certainly are upon us tonight,\" Fleming declared as the renovated Hallamor was officially unveiled this past weekend.

The limestone structure retains almost all of its original features from its 1880's construction.

The building is a nationally recognized historic landmark and is home to a wide range of cultural and educational programs and the site for concerts, lectures, are exhibits, dances, Irish music classes and a center for genealogical research.

CBS 58's Michele McCormack who attended the special unveiling will show you more this Sunday, October 19th, on our weekly public affairs show \"Eye to Eye\" at 7 a.m.