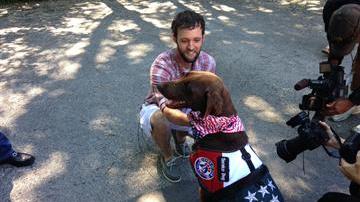 CEDARBURG -- The Cedarburg Independence Day parade brought crowds, sirens and fireworks -- a fun environment for most -- but when you suffer from Post Traumatic Stress Disorder, it's the kind of event veteran Ryan Holiday dreads.  After Friday, he hopes his new best friend will help get his life back to normal.

The 15-month-old rescue dog flew in from New York this week.  He'll help Ryan, who served ten months in Iraq in 2009, learn to manage and cope with his PTSD.

Ryan says his unit was ambushed many times and explosions went off around him daily.   He hoped he'd settle back into normal life here stateside, but that didn't happen.

After a month of trying to adjust on his own, he started looking for help, but couldn't find the support he needed until his mother contacted Guardians of Rescue and the Paws of War program.

\"I didn't want to feel like I was a burden to anybody with the issues I was dealing with, but after a while it adds up and you just know that something's not right,\" Holiday said.  \"It's either continue to follow on that path or follow the other route and try to get better.\"

Jaco went through four months of training and will get more with Ryan here in Wisconsin.   Ryan's father, who was a Vietnam vet, committed suicide after battling PTSD.  Ryan hopes his story inspires other vets to find treatment.

Friday also marked Ryan's birthday.  He says Jaco is the best gift he could have received.

For more info on the Guardians of Rescue program, visit this link