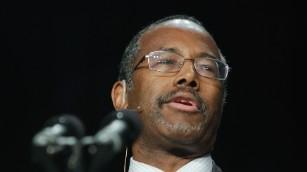 While the bombastic real estate tycoon dominates much of the GOP field, the retired pediatric neurosurgeon with a calm bedside manner is quietly emerging as a serious presidential contender.

Carson is tied with Trump for first place in a new Monmouth University survey of likely Iowa Republican caucusgoers, with the rest of the field lagging by double digits. The Carson surge comes as Trump has set the terms of debate for the past two months, forcing other candidates to shift their focus and decide whether -- and how -- to fight back against his constant attacks.

Carson, who was awarded the Medal of Freedom for his groundbreaking surgical work, is charting his own unorthodox campaign, running as a mild-mannered culture warrior with an inspirational biography. But the challenge is whether he is the Republican who could topple Trump, and move beyond the cult-of-personality phase of the campaign to create a lasting coalition energized more by substance than style.

\"The most important number right now is his net favorability, which is about popularity and personality. Our guy is 71 and Trump is at 26. That is the highest we have seen since (President Barack) Obama,\" said Armstrong Williams, Carson's business manager. \"The key for us to be able to maintain such high ratings through the ideas portion of the primary.\"