Officials: Suspects charged after shooting a man in West Allis 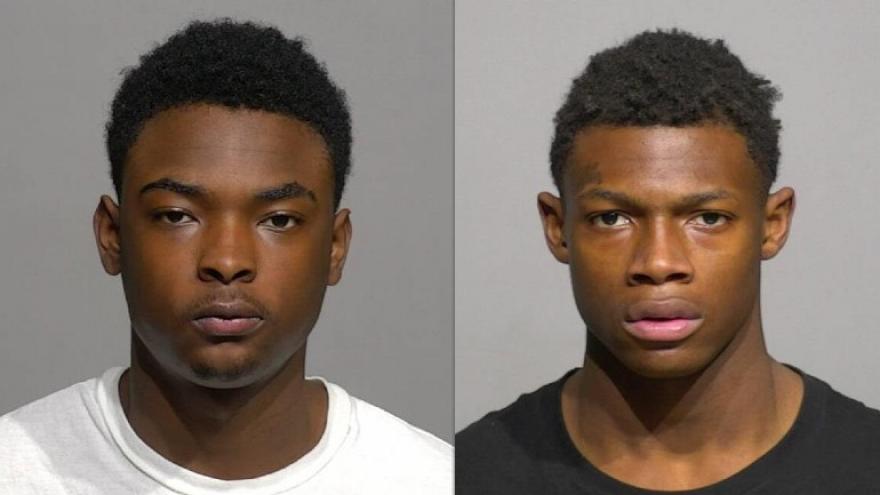 Russell McDade and Fredrick Seay were charged with multiple felonies on Saturday, May 1.

The West Allis Police Department received a 911 call from the victim just before 3 p.m., stating that he had been struck by gunfire while driving near 108th and Greenfield Avenue.

The victim told police he was driving when a dark-colored Toyota sped up behind him. He said he did not move and that he believed it angered the occupants of the other car, according to a criminal complaint.

The complaint states that the other car pulled up to the victim and one of the suspects made several statements including, "we will light this red piece of [expletive] up."

According to the complaint, the victim stated that he observed the passenger in the vehicle lean out the window and point a rifle over the windshield at him. The passenger allegedly shot the rifle and the bullet hit the victim's car.

According to the complaint, the driver then fired multiple shots at the victim while leaning out of the car. One of the shots allegedly shattered the victim's passenger window and he then realized he was shot.

Once the victim drove past a marked Sheriff Department squad car on Bluemound Road near Highway 100, he stopped his car.

Officials later found an abandoned gray Toyota Camry still running near Mayfair and Bluemound Roads. Authorities say surveillance video showed both the driver and a passenger park the Toyota and flee the area.

After police searched the area, police found Seay laying in a backyard in the 500 block of 106th Street. Seay ran a short distance from police but was later arrested. The complaint states Seay matched the description of the passenger in the Toyota.

Authorities say McDade was later located fleeing in another vehicle.

Seay told police him and McDade were driving when there was an exchange of words with someone. Seay stated they pulled over and the person was still following them. Seay allegedly told police the person rolled down his window and "was talking crazy to them." According to the complaint, the person called them the N-word. Seay told police they turned off on Greenfield and the red car followed them.

Seay allegedly told police him and McDade are "blood cousins" and consider themselves brothers. According to the complaint, Seay said the person in the red car was "extremely disrespectful" and they said some things back to the driver, "but not much."

Seay admitted to police that he and McDade had guns in the car. The complaint states that Seay said he wasn't sure why they were being followed but he felt his life was in danger.

The complaint further states, Seay admitted that he hopped out of the car and "took care of business". Seay allegedly admitted he used the black rifle and shot one time and that he was trying to protect himself and get this car to stop following them. Seay stated that he only shot one time because this was a "warning shot".

According to the complaint, when police told Seay that he might have struck the man in the red car and he allegedly said, "life goes on".

The complaint states when asked about the second shooting, Seay stated "he is my brother and if he shoots, I shoot" (referring to McDade). Seay stated he would die for McDade. Seay allegedly told police he shot first and McDade also shot a gun, but stated "I busted him down first".

Seay allegedly told police that after the second shooting occurred they left the area in their car and he called his girlfriend, who was with McDade's girlfriend, to come and pick them up.

According to court records, McDade is facing felony first degree reckless injury and use of a dangerous weapon, and felony possess firearm adjudicated delinquent of a felony.

Both McDade and Seay have a preliminary hearing on Friday, May 7.

The West Allis Police Department received a 911 call from the victim just before 3 p.m., stating that he had been struck by gunfire near 108th and Greenfield Avenue.

Police say the victim attempted to follow the suspect vehicle northbound on S. 108th Street before stopping his vehicle near 99th and Bluemound Road. He was then taken to a local hospital for treatment of his injuries.

Police say the suspects, ages 17 and 18, are both from Milwaukee.

West Allis police say this appears to be an isolated incident and there does not appear to be any ongoing danger to the public.

The incident temporarily shut down all northbound lanes of Wisconsin 100 near Greenfield Avenue in Wauwatosa Monday afternoon,

Anyone with information about this incident is asked to contact West Allis police at 414-302-8000.