I-85 collapse: Three arrests after major fire under Atlanta highway 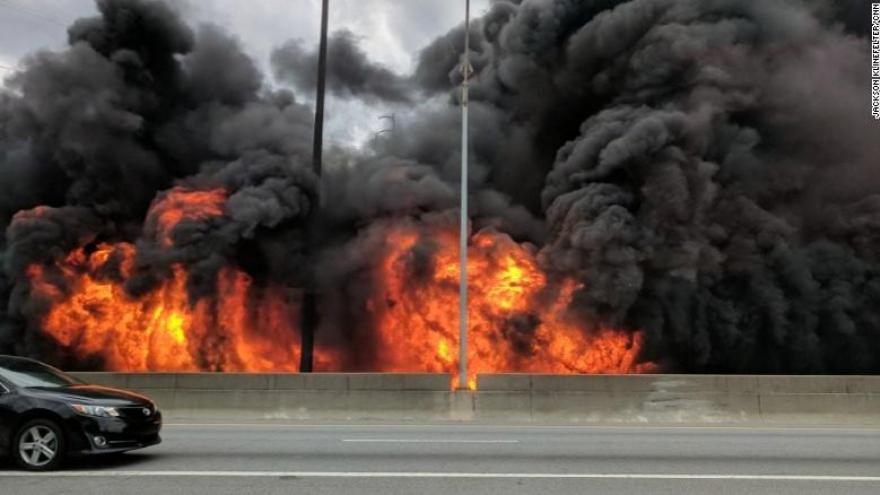 Atlanta (CNN) Three people were arrested Friday in connection with a huge fire that caused part of an elevated interstate running through Atlanta to collapse, the Atlanta Fire Rescue Department said.

The mysterious fire caused the collapse of part of Interstate 85 northbound Thursday evening -- injuring no one -- and also damaged the southbound portion, forcing the closure of all five lanes in each direction for the foreseeable future.

That left drivers in one of the nation's most congested cities faced a jarring new reality as they were forced to game out how to get around while a section of I-85, one of the Southeast's major north-south arteries, was blocked.

The shutdown likely sets the city up for traffic headaches for months after creating navigation hell Thursday with jams that extended five miles or more and stranded motorists for hours.

The closure comes at a sensitive time for a city accustomed to gridlock -- with hordes of spring break vacationers poised to drive though the regional hub and the Atlanta Braves playing a preseason game Friday night in their new stadium northwest of the city.

"I think it's as serious a transportation crisis as we could have," Atlanta Mayor Kasim Reed said Thursday evening.

• It will take "at least several months" to rebuild the collapsed and otherwise damaged portions of I-85, Georgia Department of Transportation Commissioner Russell McMurry told reporters Friday afternoon.

• The cause of the fire isn't known, McMurry said.

• The fire started in a fenced-in area under the expressway where the state stores construction materials, McMurry said. Those materials include what he first said were PVC pipes but then said they were HDPE -- high-density polyethylene -- pipes.

• Measuring the traffic impact with that section of I-85 closed, there has been a 50% increase on Interstate 285 that rings the city and a 25% increase in traffic on major streets near the closed area, he said.

'Fell with a big kaboom'

The fire started Thursday evening under I-85 in northeast Atlanta, north of the highway's split with I-75.

At first, I-85 motorists drove through the smoke, and firefighters fought the flames below. It eventually grew into a massive fireball.

"There was a 40-feet or higher wall of fire. Power lines were falling and arcing heavily and falling in the streets," Stafford, the spokesman for Atlanta Fire Rescue, told CNN.

The elevated span of highway collapsed about 7 p.m. Thursday as crews battling the fire got out of danger's way, fire officials said.

As concrete began falling from under the bridge, firefighters were asked to step back, Stafford said. "Not even two minutes later, the highway fell with a big 'kaboom.' (It) knocked our guys back."

While the highway is normally jammed with cars around that time, there were no fatalities, Reed said, as traffic flow had been halted.

More than 220,000 cars per day are estimated to drive through that stretch of the interstate. Officials scrambled to come up with alternate routes and encouraged riders to use public transit.

Social media users posted surreal images showing motorists -- before the collapse -- choosing to drive into the black smoke that billowed onto the highway as the fire burned beneath them.

CNN's Eliott C. McLaughlin was driving north on I-85 during the evening rush hour when he saw smoke rising from underneath the elevated highway.

Many cars on the left side of the five-lane section barreled through the thick black smoke. They disappeared into the darkness as they drove, he said.

McLaughlin slowly followed the taillights of an SUV through the smoke.

What caused the fire?

McMurry, the state transportation boss, said it wasn't immediately clear what started the fire at the state's construction-equipment storage area near the bridge.

Gov. Nathan Deal said Thursday that he had heard speculation it was caused by some "PVC products that caught fire."

McMurry initially said the materials stored under the bridge were PVC pipes but later said they were HDPE -- high-density polyethylene -- pipes. He said the conduits are used in the "traffic management, cabling, fiber-optic and wire network."

"We're as eager to learn the cause of this fire as anyone," he said.

Two fire trucks from Hartsfield-Jackson Atlanta International Airport south of the city rushed to the scene and sprayed foam on the fallen section of roadway and the flames.

Investigators have no evidence the fire is linked to terrorism, and an investigation is underway, the mayor said.

The Environmental Protection Agency took samples of the air and of the water in a nearby creek; results will be available in about two weeks, EPA spokesman Larry Lincoln said.

Authorities worked through the night to access the bridge and ensure the risks from the collapse are contained. Smoke still rose from the site Friday morning.

Most structural materials lose strength when subjected to high temperature, meaning the concrete could have been compromised by the heat, said Georgia Tech professor Reginald DesRoches.

He said it was too early to tell how long it would be for that part of I-85 to reopen but estimated it could be weeks or months.

"It's going to take some time to get it repaired and to get it back in service," the governor said, without offering a time frame for reopening.

Not business as usual

MARTA, Atlanta's rail and bus system, will offer extended service through the weekend.

One school district, in nearby DeKalb County, canceled classes Friday. Schools in Atlanta were open, and city and state offices didn't open until 10 a.m. Friday.