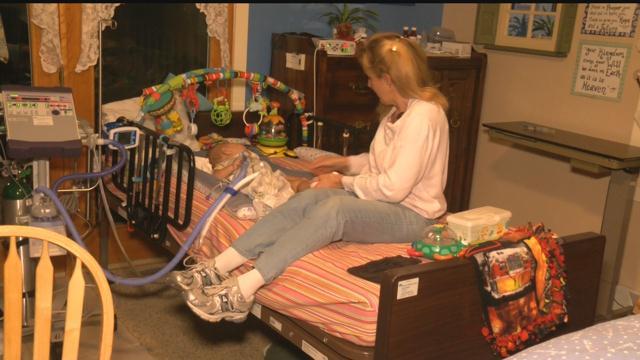 So they don't have to die alone: a Sheboygan mother started comforting babies whose parents were just too distraught to do it themselves.

Now, she's taking these children with terminal or life-threatening illnesses into her own home to give them the love and care they need.

Cori Salchert is already the definition of super mom with eight of her own children. But four years ago while finishing a near-deadly battle with some auto-immune disorders. She decided she still had more love to give.

"My favorite thing is to climb into bed and lay next to him nose to nose and I talk to him about heaven," said Cori Salchert.

Twenty-month-old Charlie, born with brain damage, wasn't given much time to live and at four months old his biological father decided it was just too much.

"It's not that he was unloved or unwanted. It was just unmanageable . And so we were given him," said Salchert.

Adopted by the Salcherts, foster parents who specialize in children too sick to be adopted and who have already been down this road with another foster child.

"Someone needs to be there when he dies. The fact that hes going to die is sad and I can say I don't want to deal with it but it doesn't change the fact that he's going to die. We've just made the decision that we will stay and be there," said Salchert.

Even busy in the kitchen Charlie is never too far from Cori. In fact she can see him right through a window.

Knowing the love he is given from his family makes all the difference.

"He reaches his hand out and wants you to kiss it and that's how he lets us know he knows your there," said Salchert.

They also know his time here on earth is limited. But Cori says she looks death in the face because her faith takes away her fear.

"One of these times when his lungs aren't ventilating the way they're supposed to and I won't be able to clear his airway. And at that point in time it will be al mo done and he'll fly away. And he'll be good and we will eventually be good. And I wouldn't miss this for the world as hard as it is," said Cori.

Cori and her husband are also fostering three triplets, just nine months old. They came to the family in poor health, but they are on the road to recovery.

Cori says, if there is one take-away from this story, she hopes people who feel even slightly compelled to foster a child will do so.