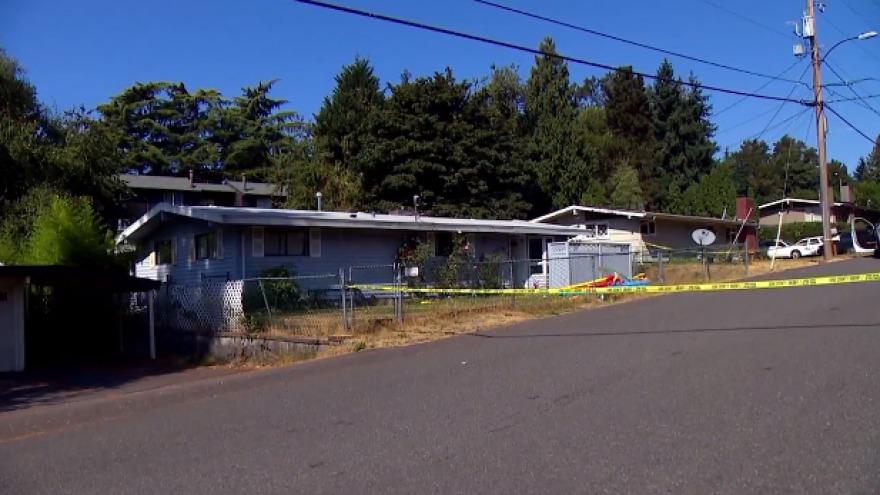 SEATAC, Wash. (KOMO) -- A homeowner shot and killed a burglar Thursday morning who was trying to break into a room where 2 of his young children were sleeping, the King County Sheriff's Office says.

A second burglar fled and is at large.

When deputies arrived at the scene after 11 a.m., they found a man lying next to a bedroom window. He was dead.

The 35-year-old homeowner old his mother he heard a knock at his door late this morning. Moments later he heard another noise coming from a back bedroom where 2 of his young kids were sleeping, she said. His other 2 children were already at school, she added.

The homeowner saw two men trying to break into the window, his mother told KOMO News. He grabbed his gun and fired several shots toward the suspects, killing one of them.

"Oh my God, I mean… I ache for the person. But then my heart goes out to my son because this is something he has to live with for the rest of his life. But I’m glad he was able to protect him and my grandkids," said Mona Shade, the homeowner's mother.

Officers on foot, dogs and the Sheriff's Office's Guardian 1 helicopter searched unsuccessfully for the second burglary suspect. Deputies aren't sure if either suspect was armed.

Deputies don't believe the house was targeted for any other reason than the burglary, a sheriff's office spokeswoman said.

It will be up to the prosecutor's office to decide if the homeowner should face any charges for what happened, she said.

"The person absolutely has the right to protect themselves and their family on their own property. Again, it has to be reasonable and they have to feel their life or somebody else’s was threatened with serious bodily harm," said Sgt. Cindi West, King County Sheriff's Office.

Shade said her son didn't know either of the two men who tried to break into her son's home.

He armed himself after a previous break-in a couple of years ago, she said. Luckily, no one was home at that time, she added.

"It’s still something you don’t want to have your son go through," Shade said.