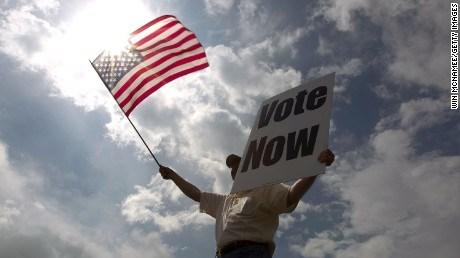 With eight residents voting and five times as many reporters watching, Dixville Notch has spoken.

On a frigid night in the largely forgotten region about halfway between the Maine and Canadian borders, the small northern New Hampshire town came alive for several minutes of kitschy democratic conflict. This latest round of wee hours voting extends a tradition that traces back more than a half-century.

With the results in from Dixville Notch this long-awaited Election Day is officially underway, and sure as the Earth turns on its axis, the end of the 2016 presidential contest seems impossibly closer.The Granite State's tight Senate race will enter Election Day deadlocked, with Democratic Gov. Maggie Hassan and incumbent Republican Sen. Kelly Ayotte each Dixville notching 4 votes.

Tuesday night's result will hearten superstitious Clinton supporters. The town's small collection of dedicated voters have correctly picked the eventual winner in three of the last four contests. In 2000 and 2004 it broke for George W. Bush and in 2008 it delivered a victory for Barack Obama.

Its more recent results have been less predictive. Romney and Obama split 10 votes in 2012, and John Kasich edged out Trump in this year's GOP primary kick-off.

Millsfield in 2016 is looking to horn in on what has been a calling card for Dixville Notch since 1960, when John F. Kennedy shutout Richard Nixon, 9 votes to nil. Hart's Location, too, has a tradition here, one that traces back to 1948, when voting began at dawn, and then a move to midnight in 1952. But they quit in 1964, leaving Dixville Notch as the leading hours-after-primetime player.

"We actually have a population here," Urso told CNN. "They may be registered to vote there (in Dixville Notch), but if you ask them where they live, you'll find that nobody actually lives there."

The Dixville Notch voting takes place in the storied Ballot Room of the Balsams Grand Resort Hotel, which has been closed to tourists for five years as new owners work to revamp the once bustling ski stop. Millsfield's decision to take on the embattled establishment was made, he said, during a post-primary skull session.

"We had a meeting of all the voters -- because all the voters can probably fit in my living room," Urso said. Asked if they wanted to continue midnight voting in the general election, "Everyone said, 'Yeah.' "

But why this year -- why call attention to the town during this especially divisive season?

"We don't have that problem in Millsfield," Urso said of his isolated provincial town. "We almost never talk about politics amongst ourselves. Whether it's divisive across the country ... it doesn't pertain to us."