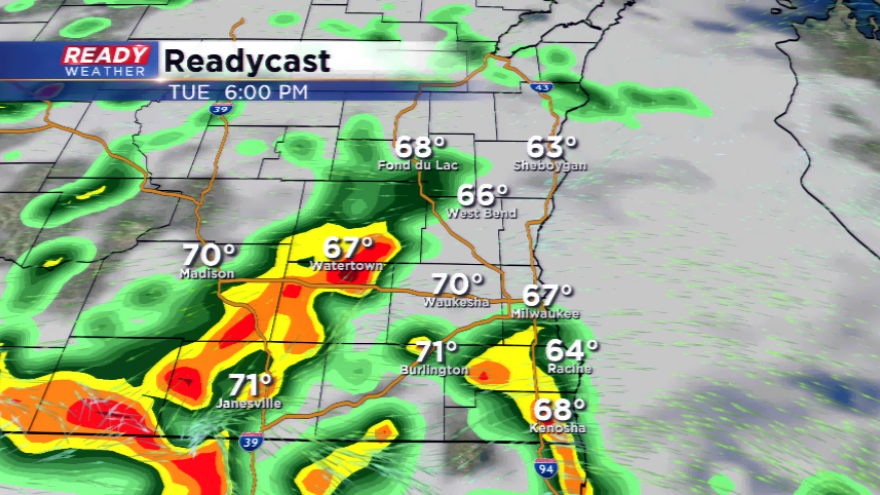 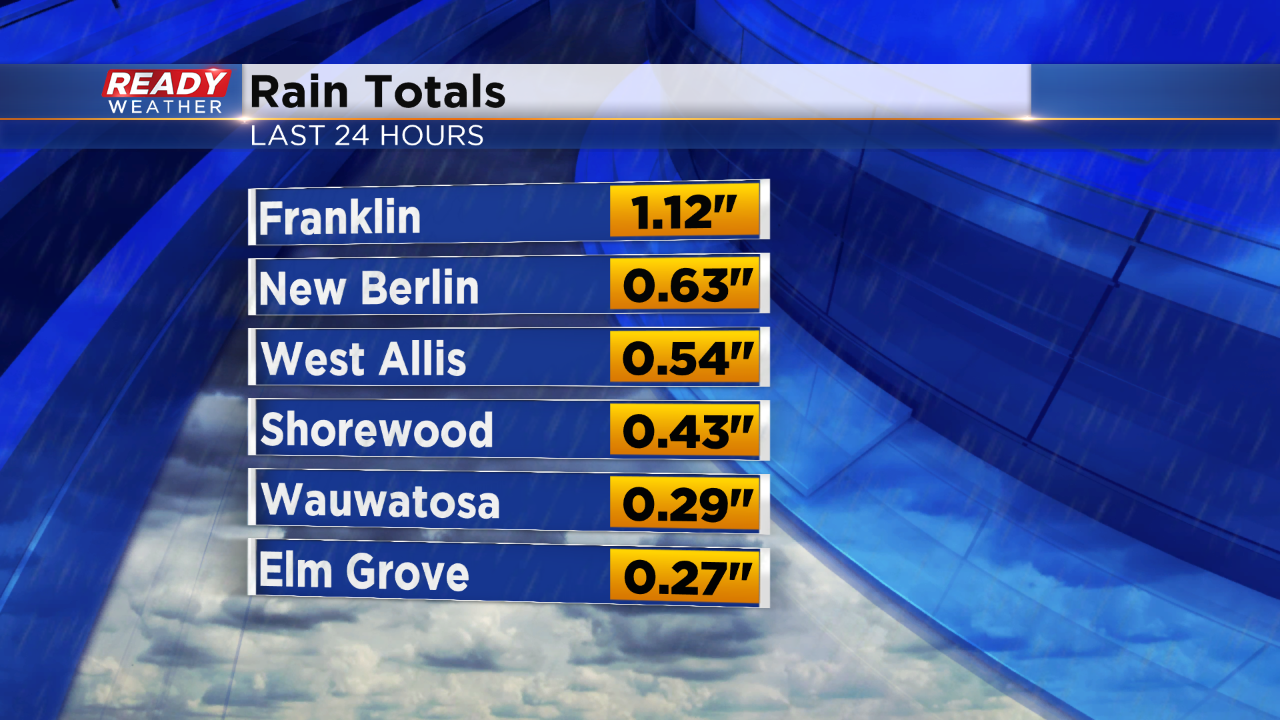 7 PM Update:  Here are some quick totals from the metro area.  Additional rain and storms are possible through 10 pm.

An areal flood advisory has been issued for Walworth, Racine, and Kenosha counties until 8:30 pm.  Heavy rain between 1" to 2" in those areas could create some flooding issues, especially as more rain moves in from the south.

5 PM Update:  Rain with embedded storms continue to develop across northern Illinois and move into southeastern Wisconsin.  The clouds and the precipitation have shunted the instability to our south.  While an isolated strong storm is possible, the overall severe threat is low.

Locally heavy rainfall has been recorded in Walworth county.  Some areas have picked up 1" to 2".  The Flash Flood watch continues for Walworth, Racine, and Kenosha counties until 1 am.

Scattered showers and storms will continue to develop this afternoon and evening across southeastern Wisconsin.  An isolated strong to severe storm is possible with wind and hail.  It appears that the tornado risk will stay just to our west.

Noon Update: The first round of showers has passed across the area. That batch initially had some lightning, but weakened as it drifted northeast across our area. The lake breeze is still around and that has kept storms down here locally. But, it's still leading to some issues. In between storm chances we're also cautioning folks to stay out of the water today. 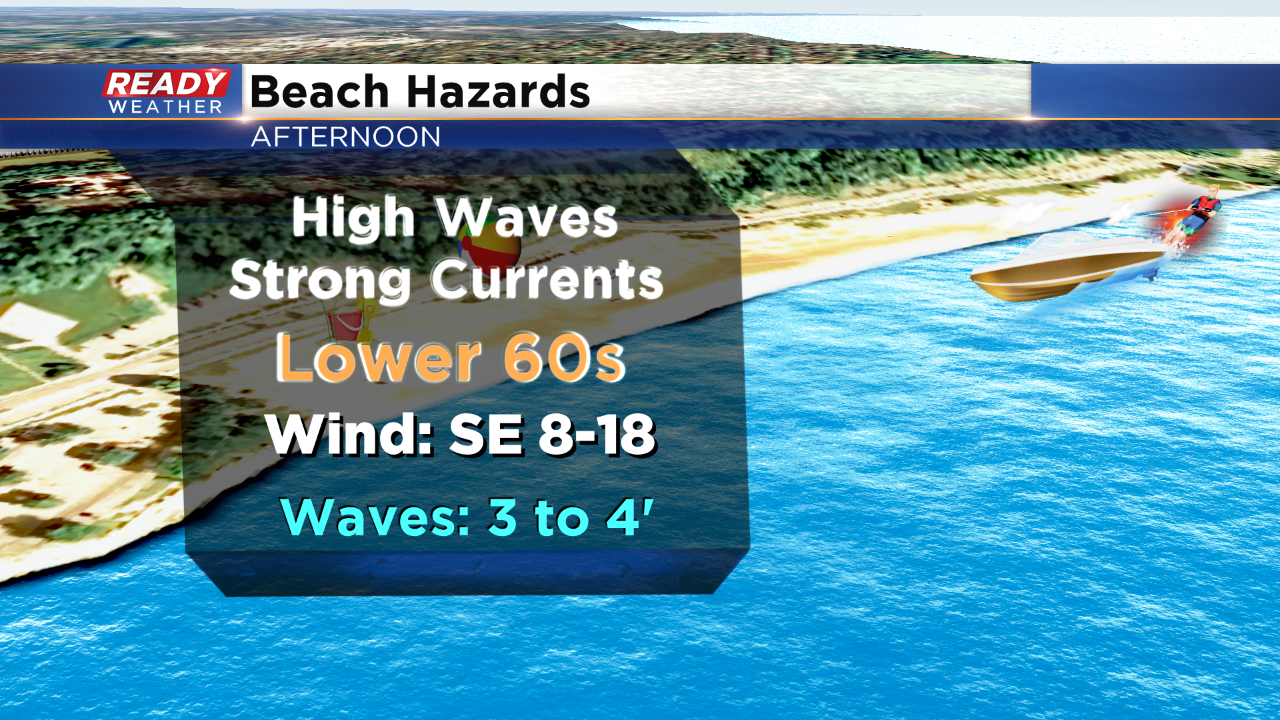 The direction of the wind is churning up some larger waves this afternoon. In addition to strong currents, long shore currents (that run parallel to shore) and crashing waves, cold water temps can make for life threatening conditions. Waves are expected to settle down this evening. That's when the focus turns to round two of storms.

Just before the noon time, the National Weather Service got word of some brief rotation with a funnel touching down a few times, as reported by law enforcement. 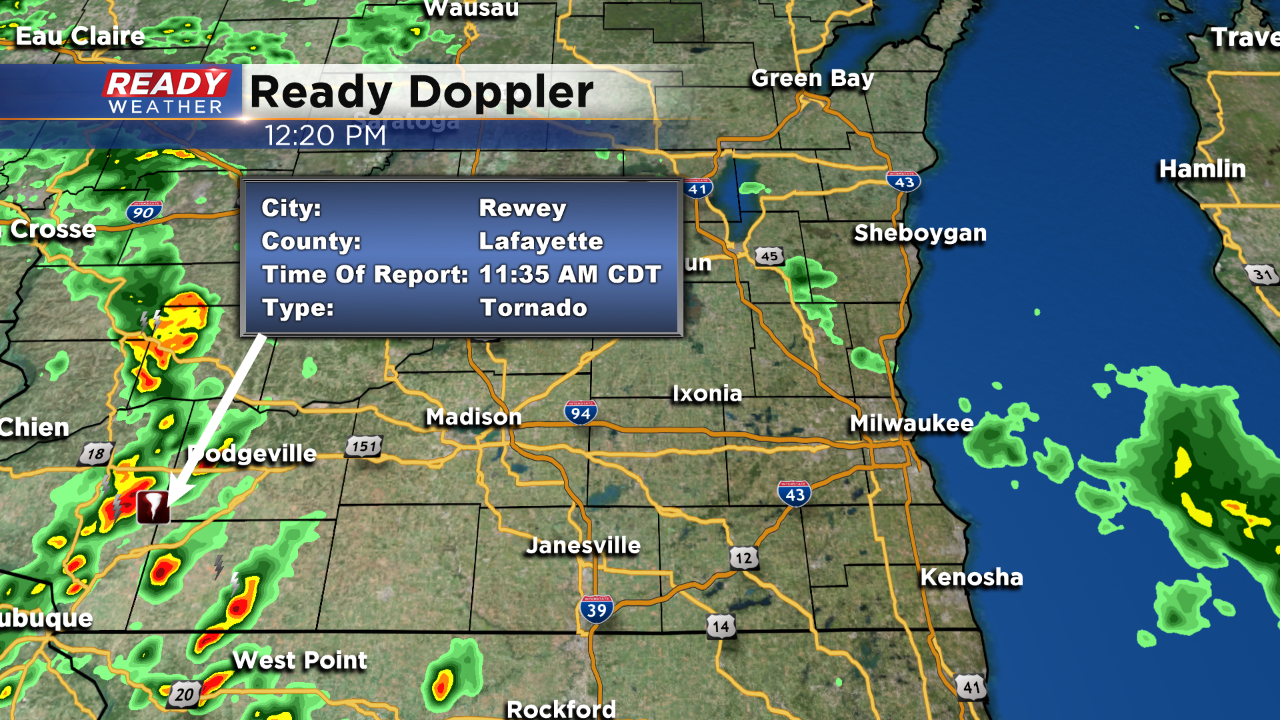 Keep in mind any storms can spin up funnels. These storms may weaken some as they head our way later this afternoon, but the timing isn't great. This line will be over the area during the commute home. The NWS's Storm Prediction Center still has the best chance for severe storms to our west. 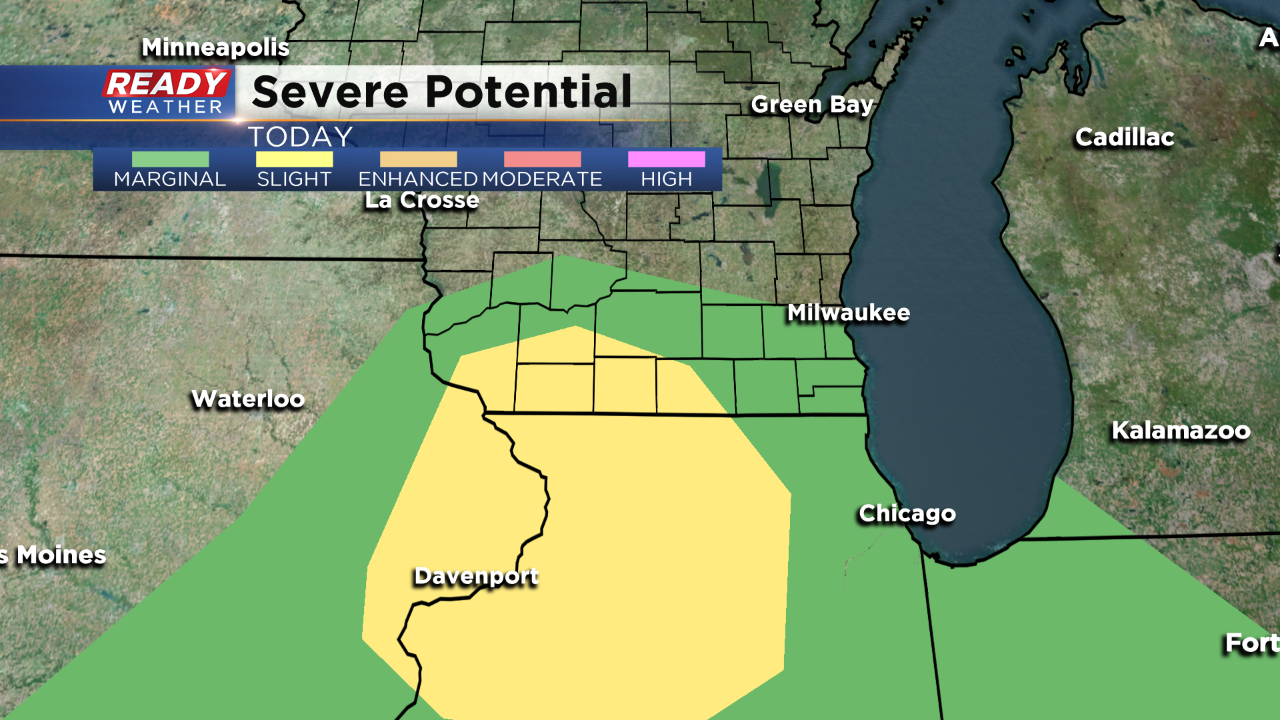 Anticipate storms around during the evening commute and throughout the evening and overnight. Heavy rain could lead to urban ponding so use caution if you need to travel. Our latest in house model shows isolated areas that may receive 1-2" of rainfall. While this is just a model, it gives you an idea of what you can expect. While the greatest threat for heavy rain is across our southern spots in the Watch, any area could see an inch of rainfall through tonight. 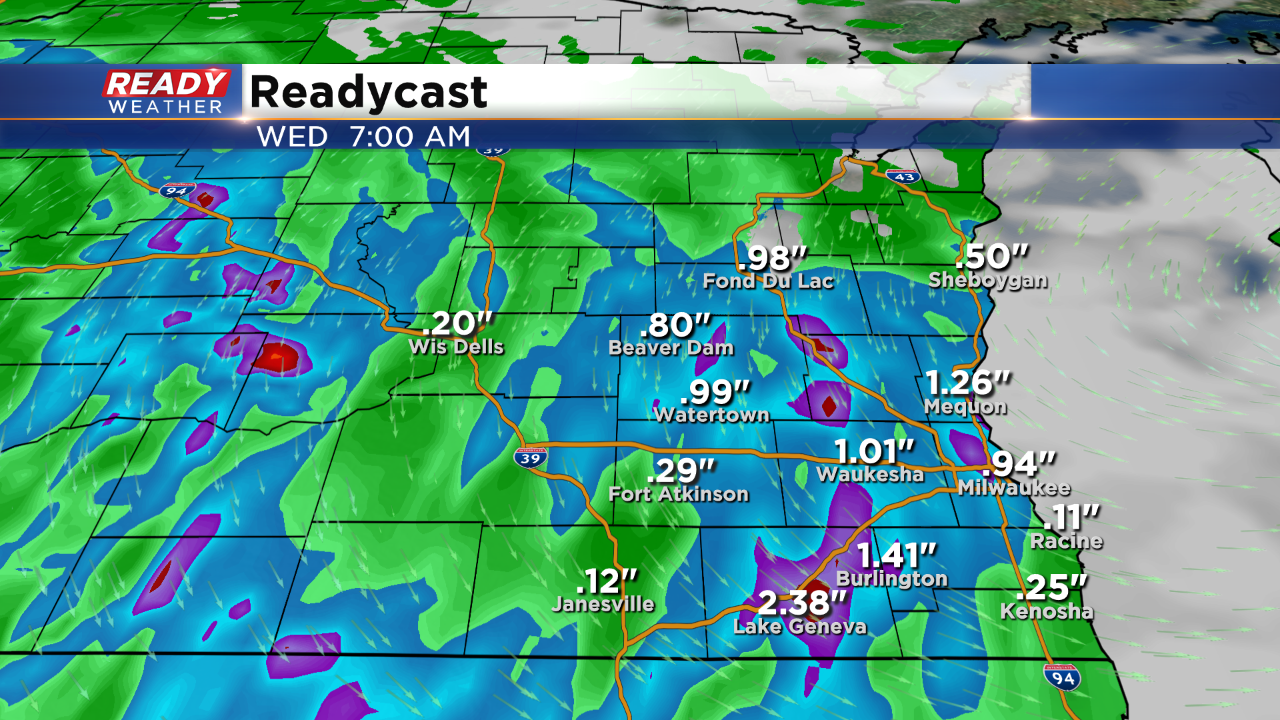 Two rounds of showers and storms could usher in heavy rainfall and strong to severe storms. An area of low pressure is positioned to our southwest today. The first round of storms could bring heavy downpours, lightning, and small hail; however, most of the activity should stay under the severe limit. 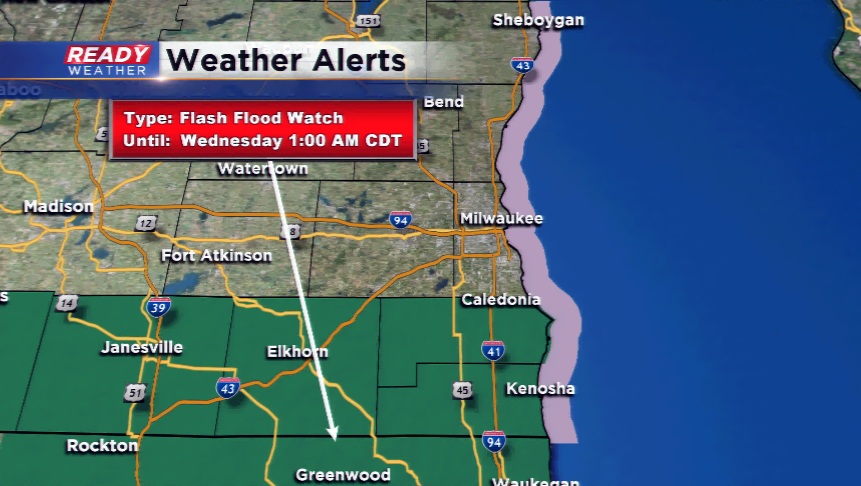 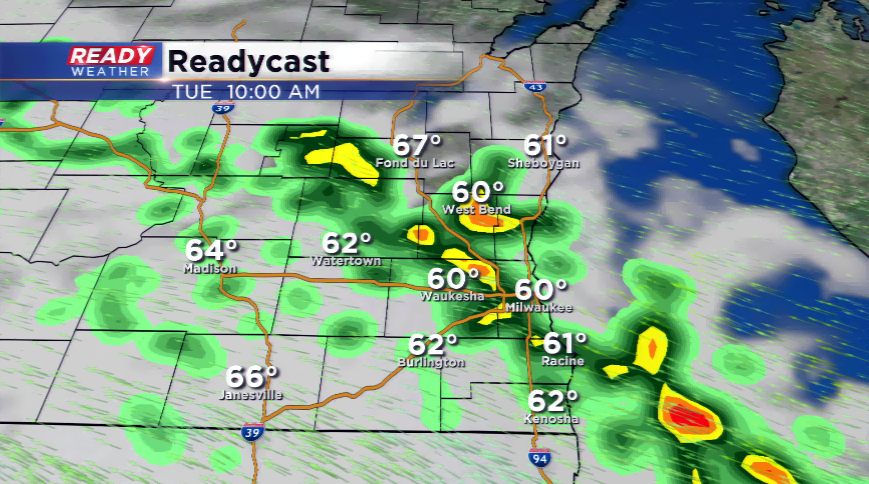 Better severe weather chances will take place in the afternoon and evening, but the storms will be dictated by the instability factor, or how quickly the atmosphere will recover from round one. Warmer temperatures, higher dew points, and sunshine are key factors in producing instability and storms – without them, it’s a challenge to see severe storms. 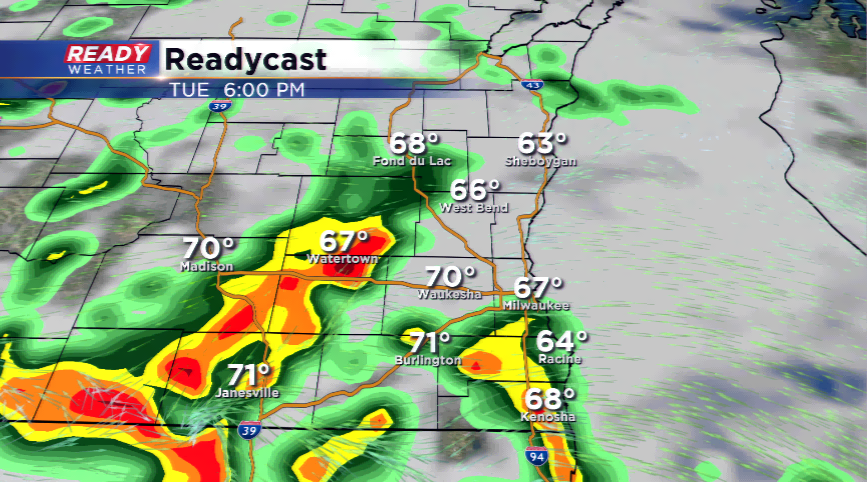 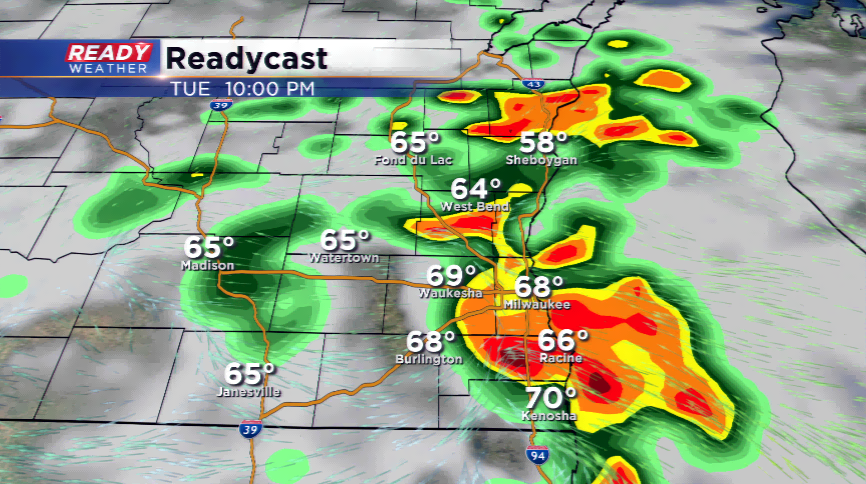 Any storms that fire in the PM hours could contain very heavy rainfall, large hail, and high winds. The biggest threat for these storms will be right along the WI/IL border. With training storms, redevelopment of storms in the same locations, this is why flash flooding could be possible. 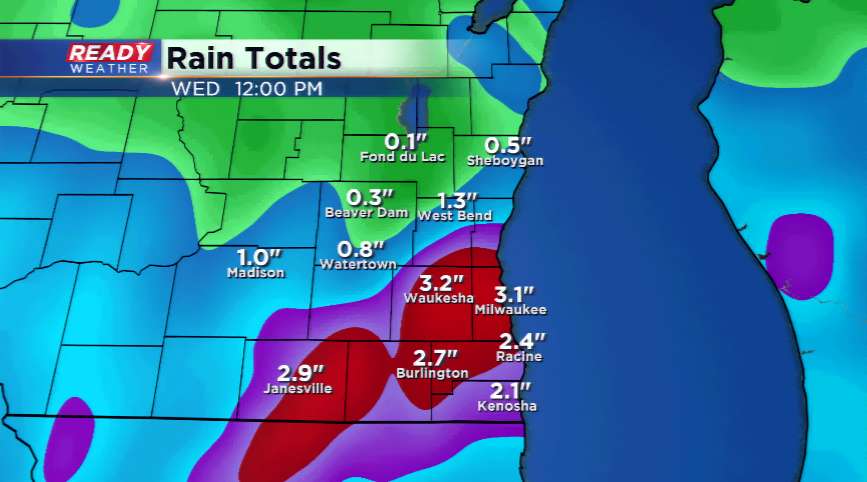 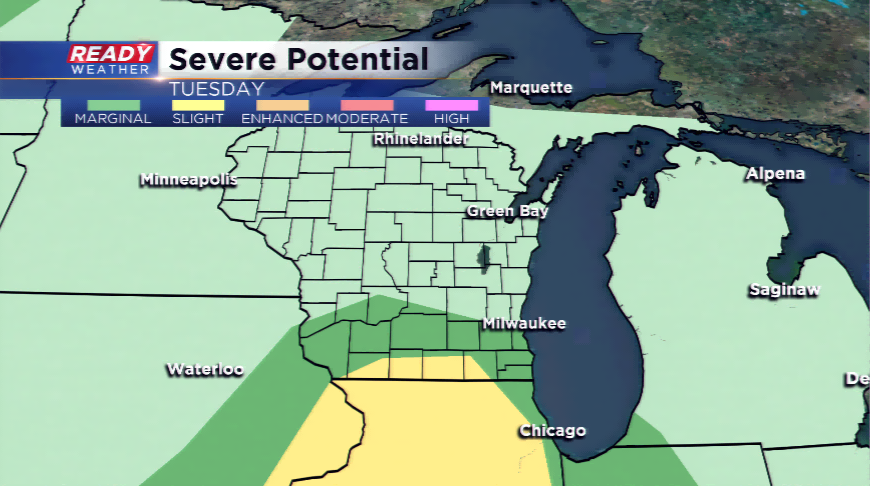 The thunderstorms will come to an end by early tomorrow morning. The Flash Flood Watch kicks off at 1 pm this afternoon and runs through 1 am Wednesday. There could be a few lingering showers or storms by daybreak tomorrow, yet the activity will be ending for most of the Summerfest festivities.