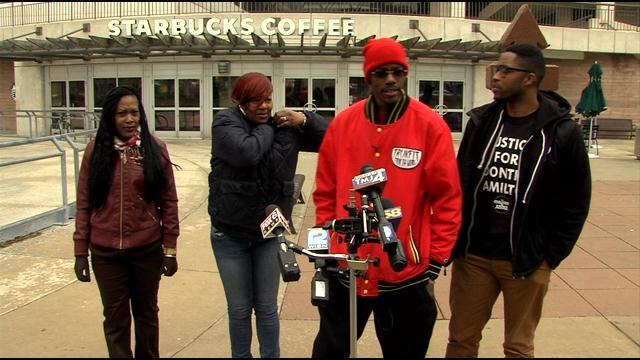 On the one year anniversary of the fatal shooting of Dontre Hamilton by a Milwaukee Police Officer, Hamilton's family is holding a gathering at Red Arrow Park where he died.

Nate Hamilton said groups will march to the park from several locations that will remain undisclosed.

'There's so many that have lost their lives. We want to recognize them,\" Nate Hamilton said at a Tuesday press conference. \"We want the mothers stand with us to prepare for our big event in Washington.\"

An independent investigation concluded that Christopher Manney was justified in shooting Hamilton as the two struggled for Manney's baton.

But Manney was fired from the Milwaukee Police Department for not following police protocol when dealing with Hamilton and responding to complaints from Starbucks workers about Hamilton sleeping near their shop.

\" We understand that this officer has been fired and he's still trying to get his job back,\" said Nate Hamilton. \"There's a big problem when the police department sees that he broke policy but the district attorney found there was no reason to press charges.\"

The Hamilton family is also taking part in a \"Stop the Violence\" rally at Bethany Lutheran Church on Saturday April 25th.

Nate Hamilton will also be a live guest on the CBS 58 News at 4 p.m. the day before the Red Arrow Park anniversary, Wednesday, April 29th.