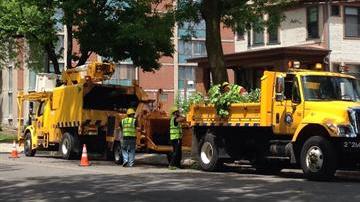 MILWAUKEE -- There's no shortage of damage in the Milwaukee area.  Trees came down, debris tossed into roads.

It's been a busy morning for Milwaukee Department of Public Works crews.  They've taken more than 70 calls about storm damage since 8:30 this morning.

They tell us most of the damage is east of 35th Street towards Lake Michigan.

There were damage reports across West Allis as well with some trees down across Root River Parkway.

The Milwaukee Fire Department responded to numerous reports of down power lines through the morning.

Governor Scott Walker spent some of last night and this morning in his basement in Madison because of the storms.  Walker stopped in Oak Creek this morning but was on his way to Platteville around 9:30 am.  He planned to stop in Platteville and then Verona.

\"We'll be going over there to survey site damage,\" Walker said early Tuesday morning.  \"Early reports were relatively minor, if any, personal human damage. Obviously other things you can replace a lot easier than someone being seriously injured. We'll be monitoring that to make sure that particularly the people in their homes in rural parts are able to assess the damage later.\"

Crews will continue to work through the afternoon and make another assessment later today.