Governor. Walker and Mary Burke face off in their first gubernatorial debate 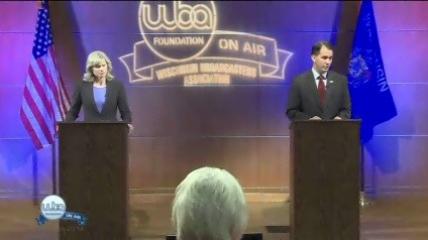 After opening statements, the candidates tackled the 7th Circuit of Court's ruling on Voter ID.

\"I think the Supreme Court made the right decision,\" said Burke, \"because I had heard stories from so many people, about the difficulties that they were facing, in being able to cast their vote\"

Governor Walker disagreed, and said he believes Voter ID will ultimately be upheld.

\"The problem we have right now, is that it's gone back and forth in the courts,\" said Gov. Walker, \"and I think that's the basis of the Supreme Court's decision.\"

Both candidates also addressed what many consider the most important topic of November's election-- the economy and job creation.

Gov. Walker is often criticized for not fulfilling his lofty promise of creating 250,000 jobs in Wisconsin during his term, but turned the focus to Burke and her time with the Department of Commerce during the debate.

\"We don't want to go backwards to those things,\" said Walker, as he scrutinized Burke's record, \"we want to go forward, the unemployment rate is now the lowest it's been since 2008.\"

Gov. Walker argued Burke was not successful in creating jobs during her time of service.

\"With regards to my record at the Department of Commerce, we had 50,000 more jobs than we have now, and the unemployment rate was 4.8%,\" responded Burke.

Each candidate was also asked to say one nice thing about their opponent at the end of the debate.

\"I respect the philanthropic efforts my opponent's been involved in,\" said Gov. Walker.

Gov. Walker applauded Burke's philanthropic work-- but Burke responded with a little more hesitation.  She stumbled before echoing the same sentiment toward her opponent.

\"I think Governor Walker has certainly done some very good things in the community,\" said Burke, \"certainly his work around domestic abuse is important.\"

The candidates also took on the issue of abortion-- while Burke emphasized a woman's right to choose, Gov. Walker, who's pro-life, emphasized educating a woman about her options.

Panelists also asked both candidates amid rumors Gov. Walker would not complete his term if re-elected, if they would serve all four years-- both Gov. Walker and Burke said yes.