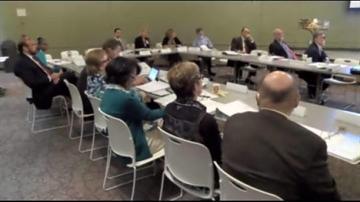 MILWAUKEE COUNTY -- It was a step toward improving mental health care in the area Thursday, as the newly formed Milwaukee County Health Board held its first meeting.

There was an increased urgency to reform the system after a deadly officer involved shooting at Red Arrow Park.

In April, Dontre Hamilton was shot and killed by a Milwaukee police officer after a violent struggle.

The 31-year-old suffered from mental illness.

The victim's family says he never got the help he desperately needed.

Mental health board member Pete Carlson believes that's because the system is too complicated and it's hard to get access to services.

Board members met to begin changing that struggle and keeping those with mental illness out of the criminal justice system.

One way to do that is by adding Milwaukee police officers to a crisis assessment response team.

\"The reality is we're one of the few states in the country that police are the ones to have the authority to detain somebody based on what many argue is a clinical reason,\" said Carlson. \"So as a psychiatrist, you'd think that that'd be the person you want to make that decision.\"

The collaboration would be in addition to crisis intervention training, or CIT, that police receive.

The officer who shot Hamilton did not have CIT training.