Goodyear is Working on Spherical Tires 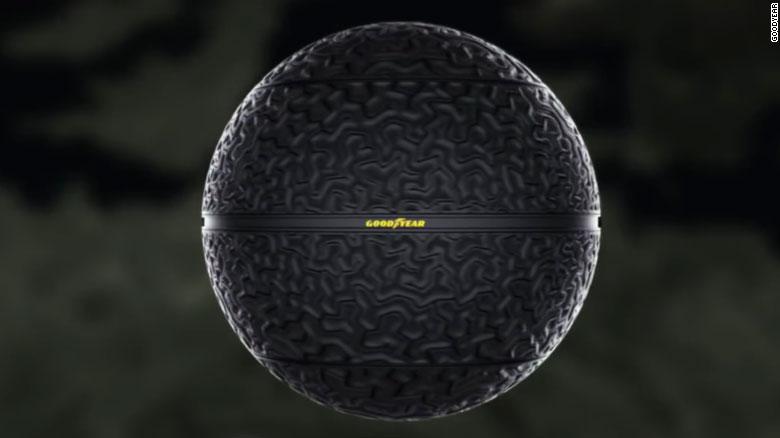 (CNN MONEY) Goodyear thinks that if we're going to reinvent the car, we might as well reinvent the tires too.

The tire maker has revealed a new concept: spherical rubber tires that can move in any direction. For a self-driving car without a steering wheel, why not try something radically different?

Goodyear (GT) says its Eagle-360 tires would allow self-driving cars to navigate tight spaces, such as parking spots or busy city roads. Instead of axles, they'll connect to the car using magnetic levitation -- potholes would no longer ruin your suspension, since your car would essentially float above its tires. Goodyear said magnetic levitation would deliver a remarkably smooth and quiet ride for passengers.

The spherical tires also have the advantage of having way more surface area than cylindrical tires, so your treads won't wear out quite as quickly. And the tires could intelligently rotate themselves to provide even greater tread life.

Goodyear also envisions some new tricks embedded within the tires. For example, sensors inside the Eagle-360 tires could communicate weather conditions to the car's traction control systems. And the tires themselves could stiffen in dry conditions and soften like a sponge in wet weather, adding traction on slippery roads.

"By steadily reducing the driver interaction and intervention in self-driving vehicles, tires will play an even more important role as the primary link to the road," said Joseph Zekoski, Goodyear's chief technical officer, in a statement.

Goodyear acknowledged that the Eagle-360 tires are a far-off-in-the-future concept.

But self-driving cars are already being tested, and industry experts forecast that fully autonomous cars will go on sale by the end of the decade. Today's cars have intelligence built in, communicating with other cars to sense accidents before they happen.

That's why Goodyear has developed a near-term tire concept that it believes could become a fixture of cars in the next few years.