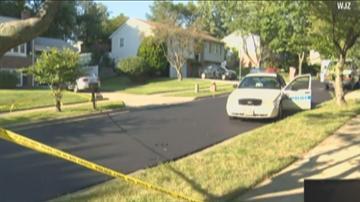 (CNN) -- A 3-year-old girl died Saturday after a man and police engaged in a chase and gunbattle, said police in Prince George's County, Maryland.

Police spokesman Lt. Bill Alexander said police began pursuing the man early in the afternoon when he drove a Nissan Maxima away from the scene of a shooting in Temple Hills.

One of the wheels fell off the suspect's car and he stopped and exchanged gunfire with police, Alexander said.

The suspect kept driving but stopped again and traded gunfire with police a second time.

Police said they don't know who fired the bullets that killed the man or the girl. CNN affiliate WJLA said police believe the man was the girl's father.

Two wounded people were found at the scene of the first shooting -- the 3-year-old's maternal grandfather and maternal great-grandmother, police said. They were in critical condition at hospitals, Alexander said.