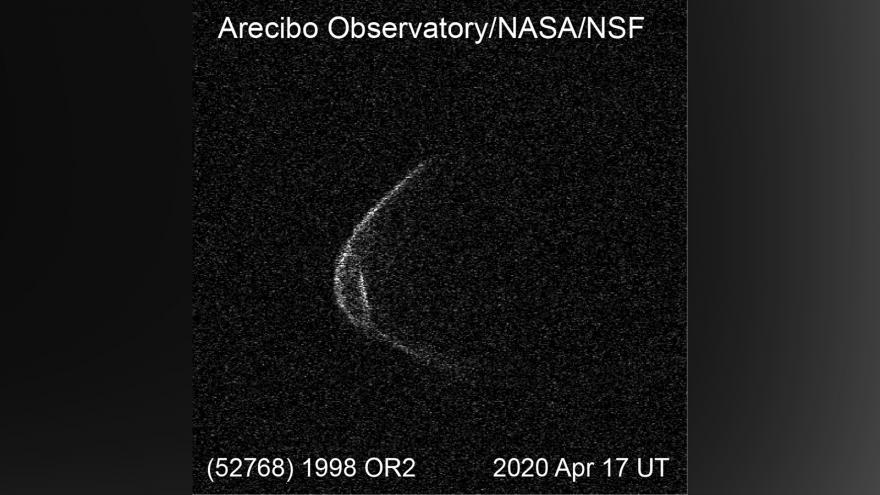 (CNN) -- An asteroid estimated to be 1.2 miles wide will fly by Earth next week, but it's not expected to collide with our planet.

And if an asteroid could be aware of such things, it appears to be wearing a face mask in deference to the pandemic, according to new images from Arecibo Observatory in Puerto Rico.

If it did impact Earth, the asteroid is "large enough to cause global effects," according to NASA, back when the asteroid was first discovered.

"The small-scale topographic features such as hills and ridges on one end of asteroid 1998 OR2 are fascinating scientifically," said Anne Virkki, head of planetary radar at Arecibo Observatory, in a statement. "But since we are all thinking about Covid-19, these features make it look like 1998 OR2 remembered to wear a mask."

The flyby is expected to occur on Wednesday, April 29, at 5:56 a.m. ET, according to NASA's Center for Near-Earth Object Studies. The center tracks Near-Earth Objects, or NEOs, that could collide with Earth.

Arecibo Observatory is a National Science Foundation facility managed by the University of Central Florida. A team of experts has been monitoring this near-Earth asteroid, among others. The observatory is supported by NASA's Near-Earth Object Observations Program and has been analyzing asteroids since the mid-'90s.

During the pandemic, scientists at Arecibo are continuing to make their observations on behalf of planetary defense. In line with social distancing, they have limited the number of scientists and radar operators at the facility, and they're wearing masks during observations.

The asteroid was classified as a potentially hazardous object because it's bigger than 500 feet and comes within 5 million miles of Earth's orbit. The experts at Arecibo can monitor the asteroids and use observations to determine their path in the future to see if they pose a risk to Earth.

"The radar measurements allow us to know more precisely where the asteroid will be in the future, including its future close approaches to Earth," said Flaviane Venditti, a research scientist at the observatory, in a statement. "In 2079, asteroid 1998 OR2 will pass Earth about 3.5 times closer than it will this year, so it is important to know its orbit precisely."

It's the largest asteroid expected to zip by Earth within the next two months, but it's not the largest ever.

That honor belongs to the asteroid 3122 Florence (1981 ET3), which flew by and luckily missed colliding with Earth on September 1, 2017. It will make another pass again on September 2, 2057. That asteroid is estimated to be between two and a half and five and a half miles wide.