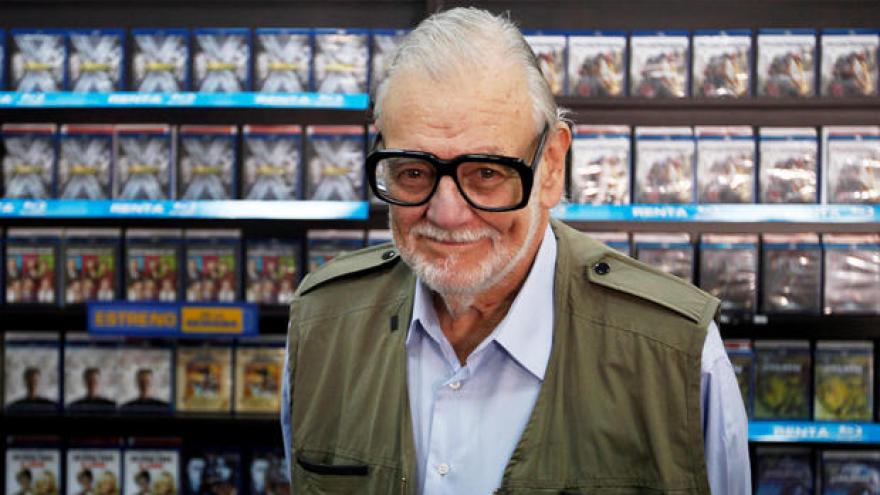 NEW YORK -- George Romero, whose classic "Night of the Living Dead" and other horror films turned zombie movies into social commentaries and who saw his flesh-devouring undead spawn countless imitators, remakes and homages, has died. He was 77.

Romero died Sunday following a battle with lung cancer, said his family in a statement provided by his manager Chris Roe. Romero's family said he died while listening to the score of "The Quiet Man," one of his favorite films, with his wife, Suzanne Desrocher, and daughter, Tina Romero, by this side.

Romero is credited with reinventing the movie zombie with his directorial debut, the 1968 cult classic, "Night of the Living Dead." The movie set the rules imitators lived by: Zombies move slowly, lust for human flesh and can only be killed when shot in the head. If a zombie bites a human, the person dies and returns as a zombie.

Romero's zombies, however, were always more than mere cannibals. They were metaphors for conformity, racism, mall culture, militarism, class differences and other social ills.

"The zombies, they could be anything," Romero told The Associated Press in 2008. "They could be an avalanche, they could be a hurricane. It's a disaster out there. The stories are about how people fail to respond in the proper way. They fail to address it. They keep trying to stick where they are, instead of recognizing maybe this is too big for us to try to maintain. That's the part of it that I've always enjoyed."

"Night of the Living Dead," made for about $100,000, featured flesh-hungry ghouls trying to feast on humans holed up in a Pennsylvania house. In 1999, the Library of Congress inducted the black-and-white masterpiece into the National Registry of Films.

Romero's death was immediately felt across a wide spectrum of horror fans and filmmakers. Stephen King, whose "The Dark Half" was adapted by Romero, called him his favorite collaborator and wrote on Twitter, "There will never be another like you." Guillermo del Toro called the loss "enormous."

"('Night of the Living Dead') was so incredibly DIY I realized movies were not something that belonged solely to the elites with multiple millions of dollars but could also be created by US, the people who simply loved them, who lived in Missouri, as I did," wrote James Gunn, the "Guardians of the Galaxy" director, who penned the 2004 remake of "Dawn of the Dead."

Romero's influence could be seen across decades of American movies, from John Carpenter to Edgar Wright to Jordan Peele, the "Get Out" filmmaker. Many considered "Night of the Living Dead" to be a critique on racism in America. The sole black character survives the zombies, but he is fatally shot by rescuers. Peele on Sunday tweeted a photo of that character, played by Duane Jones, and wrote: "Romero started it."

Ten years after "Night of the Living Dead," Romero made "Dawn of the Dead," where human survivors take refuge from the undead in a mall and then turn on each other as the zombies stumble around the shopping complex.

Film critic Roger Ebert called it "one of the best horror films ever made -- and, as an inescapable result, one of the most horrifying. It is gruesome, sickening, disgusting, violent, brutal and appalling. It is also ... brilliantly crafted, funny, droll, and savagely merciless in its satiric view of the American consumer society."

Romero had a sometimes combative relationship with the genre he helped create. He called "The Walking Dead" a "soap opera" and said big-budget films like "World War Z" made modest zombie films impossible. Romero maintained that he wouldn't make horror films if he couldn't fill them with political statements.

"People say, 'You're trapped in this genre. You're a horror guy.' I say, 'Wait a minute, I'm able to say exactly what I think,' " Romero told the AP. "I'm able to talk about, comment about, take snapshots of what's going on at the time. I don't feel trapped. I feel this is my way of being able to express myself."

The third in the Romero's zombie series, 1985's "Day of the Dead," was a critical and commercial failure. There wouldn't be another "Dead" film for two decades.

"Land of the Dead" in 2005 was the most star-packed of the bunch -- the cast included Dennis Hooper, John Leguizamo, Asia Argento and Simon Baker. Two years later came "Diary of the Dead," another box-office failure.

George Andrew Romero was born on February 4, 1940, in New York City. He grew up in the Bronx, and he was a fan of horror comics and movies in the pre-VCR era.

"I grew up at the Loews American in the Bronx," he wrote in an issue of the British Film Institute's Sight and Sound magazine in 2002.

His favorite film was Michael Powell and Emeric Pressburger's "The Tales of Hoffman," based on Jacques Offenbach's opera. It was, he once wrote, "the one movie that made me want to make movies."

He spoke fondly of traveling to Manhattan to rent a 16mm version of the film from a distribution house. When the film was unavailable, Romero said, it was because another "kid" had rented it - Martin Scorsese.

Romero graduated from Carnegie Mellon University in Pittsburgh in 1960. He learned the movie business working on the sets of movies and "Mister Rogers' Neighborhood," which was shot in Pittsburgh.

The city became Romero's home, and many of his films were set in western Pennsylvania. "Dawn of the Dead" was filmed in suburban Monroeville Mall, which has since become a popular destination for his fans.

Romero struggled to get films made late in life. The last film he directed was 2009's "Survival of the Dead," though other filmmakers continued the series with several sequels, including the recently shot "Day of the Dead."

But Romero held strong to his principles. A movie with zombies just running amok, with no social consciousness, held no appeal, he often said. "That's not what I'm about."