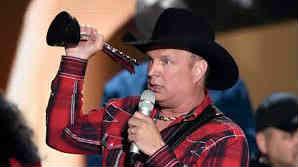 Country singer Garth Brooks is coming to Milwaukee for two nights.  It was announced Wednesday that Brooks will play the BMO Harris Bradley Center on Friday, September 25th and Saturday, September 26th.  Tickets will go on sale Friday, August 28 th at 10:00 a.m.

This is not the first time Brooks has played the Bradley Center.  He last played there in 1996 nearly 20 years ago.

Forbes magazine recently called Brooks the “king of country music” as he topped the magazine’s list of  highest paid country acts.  Brooks told Forbes he made $90 million in 2014.  Brooks released his latest album, “Man Against Machine,” in November.  It was his first album release in 13 years.

All tickets for the Milwaukee shows will be $74.89.