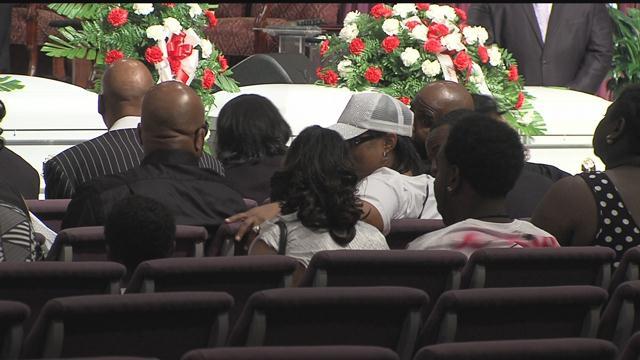 A young boy and his grandmother were laid to rest Friday. Both were killed after a driver in a stolen vehicle crashed into their car.

The service for Danielle Triggs, known as "Peaches," and her 8-year-old grandson TaeShawn Griffin were conducted at the same time.

The service included song, memories from friends and family, eulogy readings, and a sermon by clergy.

The two died after a stolen vehicle crashed into their car near 39th and Hadley on May 27th. Griffin, Triggs and five others were in the car at the time.

"Very hard. Very emotional for them. Today has been the hardest by far as they have had to endure this service for both of their loved ones at once," said Jimmy Davis Jr, Owner of JD Davis Funeral Home.

Davis Jr. spoke on behalf of the family while they grieved. The family hopes people will learn from their loss.

"The family really wanted to reach out -- don't let another family have to repeat this situation. They would want those that are doing these type of things to please stop," said Davis Jr.

"I'm hopeful and prayerful that the others will be caught as well -- that this family can get the ultimate justice that they deserve ... to honestly know and realize the pain [the driver] caused them and they want him to speak up and say who was involved," said Davis Jr.