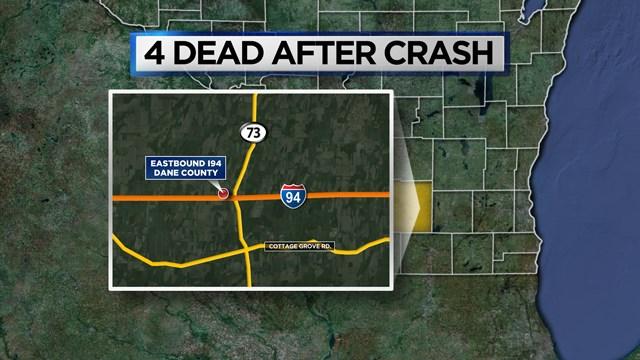 Four people are dead and alcohol may be a factor in a fatal three car crash on I-94 east of Madison Wednesday night.   According to the Wisconsin State Patrol, the driver of an Honda Pilot SUV was going the wrong way when it collided with two other vehicles in the eastbound lane of the freeway near the Deerfield exit.

The State Patrol says two of the deceased are from Milwaukee, one is from Waterloo and the fourth is from Northbrook, Illinois.

Around 10:15 PM, the State Patrol received a report of an SUV driving erratically in the eastbound lane of I-94.  As the Patrol units attempted to catch up to the vehicle, it turned around in the lane and began heading into traffic, nearly hitting head on the pursuing trooper.  Before the trooper could catch up to the SUV, it collided with two cars, a Nissan Sentra and a Toyota Corolla.