For $425, Nordstrom will sell you a pair of dirty jeans 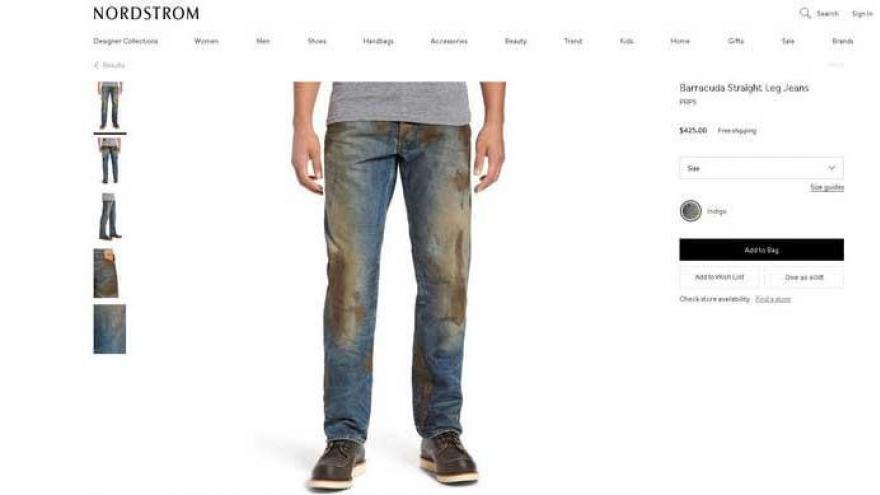 NEW YORK (CBS NEWS) -- Nordstrom is selling yet another deeply perplexing item online — this time, in the name of men’s fashion.

The jeans have received mixed reviews on social media.

“What’s the beef about buying mud jeans,” Twitter user Lori Hendry questioned. “If someone can afford $400 for a pair of dirty jeans, so what? Go for it! #Nordstrom.”

“Don’t buy #Nordstrom’s mud jeans,” Dave Shaffer commented on Twitter. “Just send your jeans to me and I will put local artisanal craft mud on them for $200 #isthishowyoubusiness.”

“They’re not even fashion,” Rowe wrote in a Facebook post. “They’re a costume for wealthy people who see work as ironic – not iconic.”

It’s not the first time Nordstrom has attracted attention with an unusual item featured on its website. A few months ago, at the height of the holiday shopping season, it marketed a rock wrapped in an artisanal leather pouch for $85. Despite mocking responses on social media, Nordstrom said the item quickly sold out.

In March, the department store again caught the public’s eye when their Clear Knee Mom Jeans made headlines.

CBS News reached out to Nordstrom for comment about the mud jeans, but has yet to hear back.