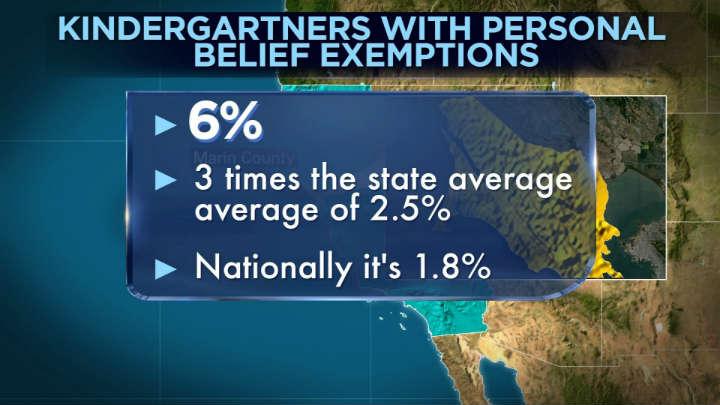 (CNN) -- Rhett Krawitt looks like a normal, smiling 6-year-old as he plays with his sister in the kitchen of their San Francisco home this week.

But it's a truly incredible scene. Rhett survived nearly four years of chemotherapy for leukemia and has been in remission for a year and a half.

Now he has another challenge -- the children who are not immunized at his school in a state where the number of measles cases grows each week.

The boy's father, Carl Krawitt, often wonders: \"Is there a scenario if a parent doesn't vaccinate and their child gets sick and gets my kid sick and...he dies?\"

Rhett's cancer treatment wiped out antibodies the child developed after being vaccinated when he was a baby. His immune system is still too weak to get new shots, so he depends on \"herd immunity\" -- being surrounded by others who are vaccinated -- to stay healthy.

If Rhett contracted measles, his parents told CNN, he might not be able to fight the illness.

And it's possible that a severe case could weaken the boy's body to a degree that, should he need chemotherapy again, he wouldn't be strong enough to withstand it.

So Carl Krawitt wrote a letter to school district officials asking that they bar kids from attending school until they have been vaccinated.

\"Instead of waiting for an outbreak and reacting to what is a disease, let's get ahead of it and avoid having that outbreak in the first place,\" Carl Krawitt said.

According to the Centers for Disease Control and Prevention, there have been 84 cases of measles reported in January, most of them linked to an outbreak at Disneyland. CDC officials believe someone from another country may have caused the exposure.

The disease outbreak became apparent when visitors reported coming down with measles after visiting the park from December 15 to December 20. At least five Disney employees have been diagnosed with measles, Disney said.

Measles is a highly communicable respiratory disease caused by a virus and spread through the air. Measles starts with a fever, runny nose, cough, red eyes and sore throat, the CDC says.

Krawitt understands that, for legal reasons, his request likely will be denied.

Typically it is up to health officials to keep students away, and only when there have been confirmed cases of a disease at the school.

Carl Krawitt and his wife, Jodi, sent Rhett to school this past year understanding that he could contract anything. They knew that 20 of the 22 children in his class are immunized --- one other child is unvaccinated.

But any parent knows that a school is a petri-dish. Kids interact in the playground, bathroom, the halls, everywhere.

California allows parents to send their children to school unvaccinated against diseases like measles, whooping cough and chicken pox. And Marin County reportedly has the highest number of parents -- 7.8% -- who've made that choice.

One mother told CNN that her children are vaccinated for measles but not against other diseases.

\"It's a well-educated group of people (in Marin County). It's a thoughtful group of people, and I think parents choosing not to vaccinate it's probably for a reason,\" Tracy Skytt said.

Herzog told CNN that 3.4% of children in the district have filed personal belief exemptions from the measles vaccine. Some say children cannot receive vaccinations for medical reasons such as being allergic to the vaccine, he said. Other exemptions cite children having immune systems too weak to be vaccinated.

The CDC says people who have had a life-threatening allergic reaction to neomycin, an antibiotic, should not get the measles, mumps and rubella (MMR) vaccination. The advice is the same for people who had a bad reaction to a previous dose of the MMR vaccine.

Herzog's district monitors every child's immunization record, he stresses, and the school district is working with the Marin County District Attorney's Office to determine if the school can legally force parents to vaccinate their children.

The Krawitts stressed to CNN that they didn't want to fight with the school over this issue, but they want to start a meaningful conversation with parents who've decided not to immunize their children.

Asked what he would tell a parent who chose not to vaccinate, Carl Krawitt said he would say: \"We were in hospital for 156 nights. We ... thought we were going to lose our child. It would sadden me greatly if one of these illnesses -- (measles, mumps, whooping cough) affected your child ...It would make me very sad to think that you would have to go through the same emotions, the same trauma that we went through because we love our children and we want them to be happy.\"