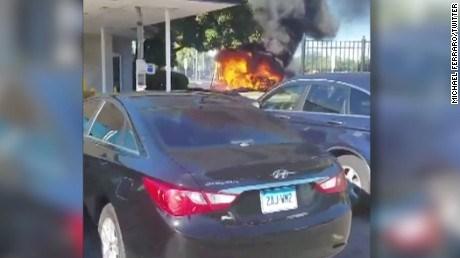 The Piper PA 34 light aircraft went down Tuesday afternoon on Main Street in East Hartford near Pratt & Whitney, a manufacturer of aircraft engines for both civil and military aviation, as it approached Hartford-Brainard Airport for a landing, authorities said.

The flight instructor, who survived the crash, told first responders and investigators he got into an altercation with the student pilot, which resulted in a struggle in the cockpit, a US official with direct knowledge of the investigation said.

The official said it appeared the student pilot, whose name was not released, was frustrated with his family and said he was being forced to become a pilot.

No recorders or video were on board the small plane, meaning there is no direct evidence to corroborate what the flight instructor said.

But based on initial interviews, authorities believe the instructor's account is truthful and that the student pilot intentionally crashed the plane.

East Hartford police released few details at a Wednesday afternoon news conference, except to say the crash appeared to be intentional. They wouldn't name the pilot or provide a motive.

The FBI, National Transportation Safety Board, the Federal Aviation Administration and Connecticut State Police are all investigating.

Local law enforcement called in the FBI, citing infrastructure concerns due to the crash's proximity to Pratt & Whitney.

The NTSB tweeted that the FBI is now the lead investigator.

Mark Poole, owner of Meriden Aviation Center and a former student of Prevalla's, said Prevalla handles most of the area's training of twin-engine aircraft.

Law enforcement officials are trying to get a search warrant to investigate the student pilot's computer. They also plan to interview his family.

The wreckage of the plane remained on Main Street in East Hartford on Wednesday. Litwin said the street might be cleared as early as late Wednesday.

A woman and her three daughters who were in a vehicle almost struck by the plane have been released from a local hospital, Litwin said.

Dual controls in the plane

"In that kind of aircraft, the Piper 34, the Seneca, it's simply a dual control aircraft, as most private planes are, and there's no way to shut down ... one side of the controls or the other," Goelz said. "It's simply in normal circumstances, one person is flying the plane and that's it."

If there were a struggle over the controls, it would have been "an impossible situation," he said.

Goelz said he'd like to know if the decision to crash the plane was a spur-of-the-moment or a long-term decision, and whether somebody encouraged the student pilot to do it. Goelz also wondered if there were clues about the pilot's psychological makeup.

CNN's Holly Yan and Aaron Cooper contributed to this report.