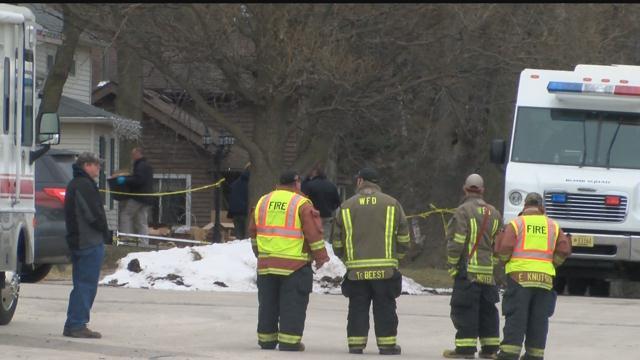 Sheboygan County authorities evacuated parts of a neighborhood in the Village of Waldo Sunday morning while investigating a series of explosions.

Emergency crews said those explosions happened inside of a home and the man living there is now under arrest.

The Milwaukee County Bomb Squad crowded the front lawn of the home on West Second Street for most of the day. A shattered window on the building showed how powerful the blast was and authorities did not want to take risks.

Officers knocked on one neighbor's door early - she asked not to be identified.

"I just know that they told us that they were evacuating people because our neighbor was up to his old tricks which - I believe he was making bombs or something," she said.

"Actually I think he was making fireworks cause they're just booms," Neil Bruss, another neighbor, said.

"But on this one he must have got carried away or something because it blew his windows and stuff out," Bruss said.

Bruss said he does not know Daniel Shilts, the 42-year-old arrested for violating his parole - but the Sheboygan County Sheriff's Department provided some background.

In 2008 Shilts was convicted for possession of an improvised explosive. In 2012, authorities again found him with large amount of chemicals for making fireworks.

In the latest situation - neighbors said it started around 5 p.m. on Saturday night.

Shilts told investigators the explosion was part of a welding accident but authorities found more chemicals in his home, according to a press release.

Authorities said the evacuation was ordered more as a precaution because there was no controlled detonation - investigators just needed to move a lot of sensitive materials.

"It's a little uneasy considering this is a small village. You never know what you're neighbors are up to," one neighbor said.

It's unclear if anyone else was home during Saturday's explosions. No injuries were reported.