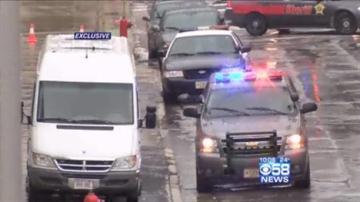 MILWAUKEE-A witness has come forward in Monday's fatal shooting of a teenaged armed robbery suspect at the hands of police.

David Hinkel  told CBS 58's Carlos Vergara that , \"I saw the officer with his weapon drawn and he's pointing it at him and he's telling him to disarm yourself. He's telling him I know you have a gun.\"

Police say 17 year old Shawn Rieves matched the decription of an attempted carjacking suspect that police had located in the transit center.

Family and friends say Rieves was an aspiring music artist who had a 3.66 grade point average.

Police maintain he was armed and made threatening moves towards officers which forced them to open fire.

Witness Hinkel said the best look he got of the suspect was in silhouette.

\"That's all I really got because I got out of there,\" Hinkel explained.

When it came to the suspect, Hinkel said he never said a word.