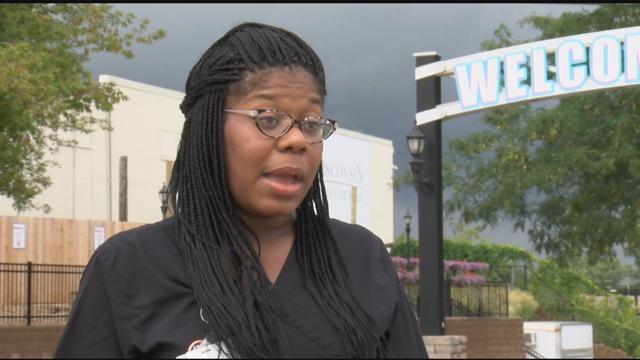 Nearly a month after saving a man's life at the state fair a VA nurse is finally taking credit for her heroic actions.
Melinda Thompson says it was just a day at the fair with family but it turned into so much more.

About a week before all of this a relative told the normally outspoken Melinda to be quiet and let God work in her life.
She says listening to that advice ended up saving a man having a heart attack at the State Fair.

Melinda  says it started out as a very rainy day at State Fair.

But it was a special one, celebrating her daughter Lailah's birthday, so although the rain poured Melinda decided to be patient.

So back to Spin City they went. But on the way, spotted a man on this bench in distress.

\"At this point I went to talk to him and he was taking shallow breaths and foaming at the mouth. I wanted to tell him it was going to be OK but when I looked at him, his lips had turned blue and he just didn't have a pulse. At that point I said 'We need to start CPR now!' \" she said.

Critical care nurse Kristi Engelberg was among those who helped Melinda administer CPR.

\"I'm like shes got this. I didn't even know what her background was but I was like she's doing awesome, \" said Engelberg.

They didn't know what was wrong but Melinda doled out orders to keep the man alive.

\"Everybody had a task. She kept time, he's doing compressions, we're swapping out. We did maybe 3-4 rounds of compressions,\" said Melinda.

Wondering. but not knowing if the man made it until her supervisor realized Melinda was the VA hero.

\"She said, 'You saved someone's life!' and I remember all I could say was, he lived? And at that moment I burst into tears. Because I always wondered but in the same breath I did what I was trained to do,\" she said.

We've been told the man was treated and released from Froedtert. Melinda hopes, one day she will be able to meet him.