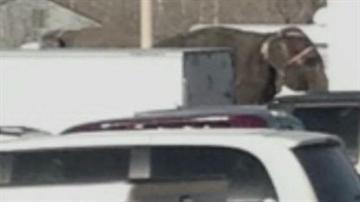 (CNN) -- What's better than a bull in a China shop? Three cows in a parking lot -- elephant cows, that is.

The trunked trio -- all circus stars in St. Louis, Missouri -- found a way out of their enclosure Saturday and went for a stroll.

Eyewitnesses told CNN affiliate KSDK that loud noises from circus goers had spooked the elephants, and they fled. But the three only made it to the parking lot, where they dinged two cars and were eventually rounded up by their handlers, according Dennis Burkholder, spokesman for St. Louis' Shriners.

The parking lot belongs to them, and the elephants may well, too -- they work for the Moolah Shrine Circus, where they strut their stuff on their hind legs under the big top to earn their keep.

One handler trying to corral the elephants wanted to tempt them with treats, circus goer Allie Tunncliff told KSDK. She captured video of an elephant between cars.

\"She yelled to one guy, 'I need anything, just pretzels, any kind of food,' \" Tunncliff said.

Burkholder said the parking lot is private and not accessible to the public. The damaged cars belong to circus employees or Shriners -- whom the circus website describes as men in \"funny red hats, who drive little yellow cars, dress like clowns.\"

The elephants didn't get any significant dents or scratches, but after their ordeal, the circus gave them a break for Saturday's night's performance, Burkholder said.

The show goes on on Sunday.