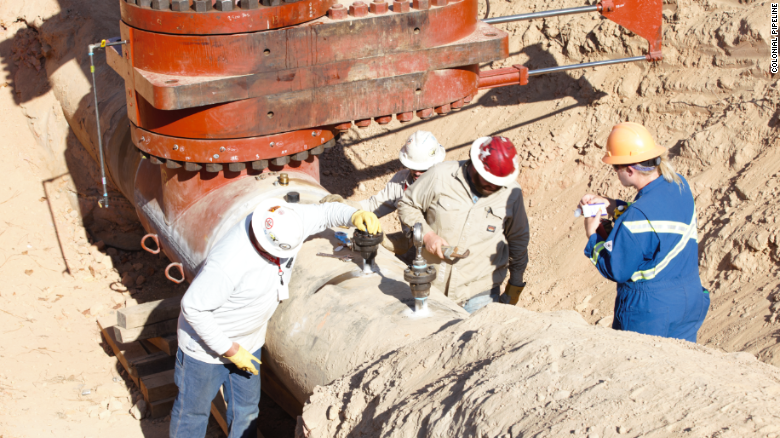 A leak has caused the closure of a crucial pipeline that carries gasoline to the eastern United States, a disruption that threatens to drive up prices and leave service stations without fuel to sell.

A section of the Colonial Pipeline, which runs from Houston to New York, has been closed since Sept. 9 after a spill of roughly 6,000 barrels of gasoline was discovered in rural Shelby County, Ala.

The major pipeline, one pipe of which has been severed, provides gasoline for an estimated 50 million people on the East Coast each day, according to company estimates.

The pipeline's operator has said full service will not be restored until at least next week. The closure has set off an industry-wide scramble as suppliers seek alternative ways to transport gasoline to the East Coast.Already, ships have been dispatched to carry fuel from Texas to New York as part of the effort.

The pipeline operator said that based on its current projections, parts of Georgia, Alabama, Tennessee, North Carolina and South Carolina will be the first markets to suffer potential disruptions in supply.The governors of Alabama and Georgia have already declared states of emergency. And the U.S. Environmental Protection Agency has sought to ease supply shortages by relaxing limits on the blend of gasoline that can be used across 18 counties in Georgia and Tennessee.Patrick DeHaan, an analyst at GasBuddy.com, said that over the next week, gas prices could spike by as much as 15 cents per gallon in Georgia, North Carolina, Tennessee and Virginia, and by as much as 20 cents per gallon in South Carolina.

Some service stations could run out entirely, he added.Mansfield Oil, a fuel distributor, has warned its customers to take fuel savings measures and to place their orders early. The company said the supply of gasoline is currently very thin along the closed pipeline, and that it was trucking in supplies from the coast to meet demand.

The company said it was treating the situation "with the same importance and urgency as a natural disaster."