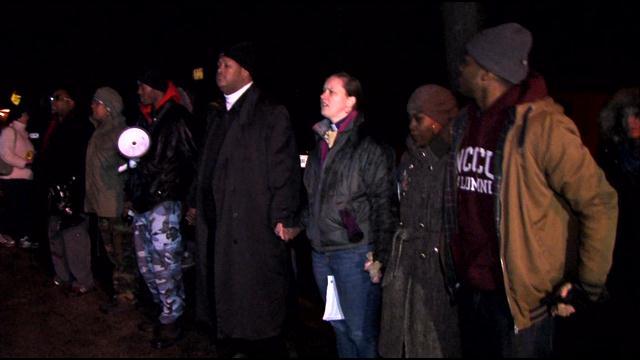 A different scene for protesters Monday evening, the family of Dontre Hamilton and supporters can usually be seen marching through downtown.

But protestors gathered outside the home of Milwaukee County Prosecutor John Chisholm's home in Bayview.

Dontre Hamilton's mother, Maria Hamilton counted from one to fourteen.

The number of times former Milwaukee police officer Christopher Manney shot Hamilton, killing him, during a scuffle at Red Arrow Park on April 30th of this year.

It was a peaceful demonstration outside the District Attorney's home Monday evening led by Maria Hamilton, Nate Hamilton, and other community organizers.

\"He needs to know it's at his door. It's not to intimidate him”, said Nate Hamilton. “It's not to scare him, but it's to provide him with a community, that says hey, we had enough.\"

Although, Manney was fired from the Police Department, the District Attorney has not made a decision if charges will be filed.

“We're having a problem with him on not making a decision, and saying we have to wait on the FBI, we have to wait on an outside investigator”, said Nate Hamilton. “If they're experts, experts shouldn't take this long to figure out something.\"

Although protestors expressed part of their message by singing Christmas carols, they say they are not at peace.

\"It's just disbelief that we have to continuously do these things, to find a way to address our government officials where they understand the significance of this matter”, said Nate Hamilton.

Protestors also spent the evening in Chisholm's neighborhood passing out flyers for another rally scheduled for Tuesday at 4 p.m. at Red Arrow Park.