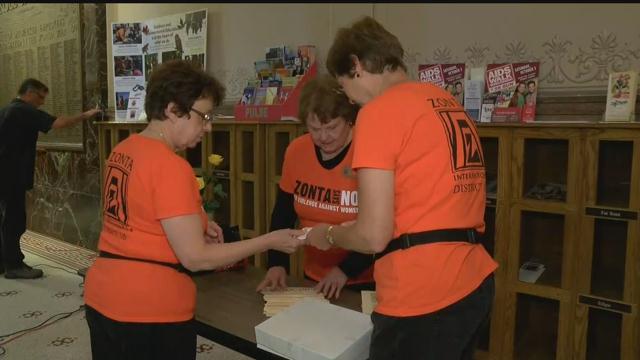 The Purple Ribbon Walk for domestic violence victims was held at Milwaukee’s City Hall and Capitol Square in Madison at noon on September 28.

They are doing this to remember all the victims who died in domestic violence cases this past year.

These victims range from 1 to 78 years old. Most of victims are in the Milwaukee area. In 2014, 91% of domestic violence homicide perpetrators were men.

"I started with Zonta a long time ago, and I have to say that we've made progress, but it's not enough. It's never enough as long as we lose one life, and to lose 36 in one year is just so painful,” said  Jacqueline Beaudry, Zonta Club Milwaukee.

There was a special tribute to the victims.

Another walk took place in Madison.

The walk that took place in Madison circled the Capitol Square and was called the Purple Ribbon Walk. In Milwaukee, the Zonta Says No to Violence Against Women Walk, took place at City Hall. Civic leaders, including, Department of Children and Families Secretary Eloise Anderson, Milwaukee Mayor Tom Barrett, Chief of Police Edward Flynn and District Attorney John Chisholm, joined concerned community members in the walks.

“The Purple Ribbon Walk is a memorial to those who have lost their lives and is a recommitment to improving the safety of victims going forward,” said Laurie Logan, president of the Zonta Club of Madison. “During the walk, we carried purple pennants bearing the names of the victims who died in 2014 to show that we carry forward their memories and that we continue our commitment to preventing violence.”

“We organized the Zonta Says No to Violence Against Women Walk to draw awareness to domestic abuse and to call attention to the steps we can take as a community to enhance the safety of victims and their children,” said Donna Kahl-Wilkerson, president of the Zonta Club of Milwaukee. “We are proud that Milwaukee County is using lethality assessment to improve the response to victims.”