Doctors Without Borders: Kunduz strike an 'attack on the Geneva Conventions' 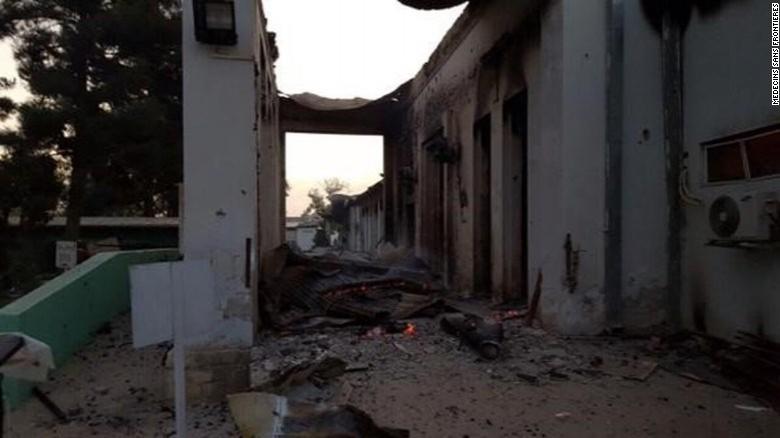 Doctors Without Borders, calling the U.S. airstrike on its hospital in Kunduz, Afghanistan, an "attack on the Geneva Conventions," is asking for an independent investigation by a never-before-used international commission.

The International Humanitarian Fact-Finding Commission has been in existence since 1991. It requires a request by one of the 76 nations that have signed on to it for it to begin its work. Its job is to investigate whether international humanitarian law has been violated.

Doctors Without Borders -- also known as Medecins Sans Frontieres, or MSF -- has said it believes the bombing was a war crime.

"Governments up to now have been too polite or afraid to set a precedent," Dr. Joanne Liu, president of Doctors Without Borders, said Wednesday. "The tool exists, and it is time it is activated."

For charity, 'the biggest loss of life ... in an airstrike'

The attack in the embattled city Saturday killed 12 medical staff members and at least 10 patients, three of them children. It was "the biggest loss of life for our organization in an airstrike," Liu said.

Another 37 people were wounded, according to the global charity group, which works in conflict zones to help victims of war and other tragedies.

Gen. John Campbell, the commander of U.S. forces in Afghanistan, has said the hospital in Kunduz was hit accidentally during an American airstrike Saturday. The Pentagon is carrying out an investigation, as are NATO and Afghanistan.

"If errors were committed, we will acknowledge them," Campbell said. "We will hold those responsible accountable, and we will take steps to ensure mistakes are not repeated."

Doctors Without Borders wants a full and transparent investigation by an independent agency.

"Their description of the attack keeps changing -- from collateral damage, to a tragic incident, to now attempting to pass responsibility to the Afghanistan government," the group said.

The United States has changed its account of what brought on the airstrike.

First, U.S. officials said that initial reports indicated the airstrike was called to protect U.S. forces. Then it said Afghan forces called for the air support because the Afghans were taking fire.

It's an open question as to whether the International Humanitarian Fact-Finding Commission could initiate an inquiry. The panel's website says it requires the consent of the parties involved, and neither the United States nor Afghanistan recognizes the commission.

Jason Cone, the U.S. executive director for Doctors Without Borders, called on U.S. President Barack Obama to consent to the probe, saying it would signal that he respects international humanitarian law. He also called on one of the 76 nations that recognize the panel to press the issue on the charity's behalf.

None of the 76 had stepped forward as of late Wednesday morning, Cone said. He said the changing U.S. accounts of the strikes underscore the need for an independent inquiry.

Cone paid tribute to the doctors who he said carried on treating the wounded while watching their colleagues die, and while the hospital burned.

"In Kunduz our patients burned in their beds, our doctors' nurses and other staff were killed as they worked, our colleagues had to operate on each other. One of our doctors died on an improvised operating table, an office desk, while his colleagues tried to save his life," Cone said.

In general terms, a war crime may be committed when there is an attack on a civilian population during an armed conflict, said Steven Kay, a lawyer who defended Kenyan President Uhuru Kenyatta against charges of crimes against humanity at the International Criminal Court,

There is an extensive body of law that regulates military action during conflict.

The aim, said Anthony Dworkin, a human rights expert at the European Council on Foreign Relations, is to draw a balance between what armed forces are justified to do out of military necessity -- which includes causing collateral damage to civilians -- and the principles of humanity.

"Hospitals enjoy a special protected status under international humanitarian law. So, to attack a hospital or medical facility, whether it is a civilian or military installation, is a crime," Kay said.

Collateral damage: A brief history of U.S. mistakes at war