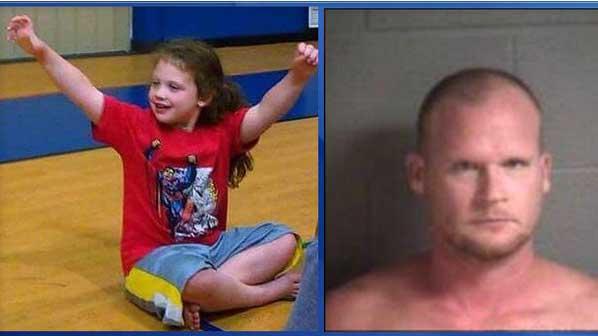 U.S. Attorney Jill Westmoreland Rose said in a statement that a complaint was filed Tuesday charging 36-year-old Seth Willis Pickering of Asheville with murder in the death of his daughter, Lila Pickering.

A medical examiner says the girl died from a stab wound to her chest Friday.

Court documents show Pickering and his estranged wife had been in a custody battle over the girl. According to the complaint, obtained by CBS affiliate WSPA,Willis Pickering didn’t have custody of the child when he took her Friday from the home of the custodian where she had been placed temporarily by the Buncombe County Department of Health and Human Services.

As investigators were looking into the parental abduction, park rangers who weren’t aware of a lookout alert that had been issued for the girl saw the two walking down a steep embankment near the Blue Ridge Parkway, the complaint says. Suspicious because there were no trails, picnic areas or camp sites nearby, the rangers approached the man after they saw him building an illegal fire, according to the complaint.

The rangers heard Pickering tell his daughter, “Don’t worry honey, we will when the cops leave,” and “Police!” when they came within 20 to 25 feet of the father and daughter.

The man said, “It’s going fine, nothing going on,” before allegedly lunging at the girl without warning.

The rangers said they hear a thud-like noise and a high-pitched sound from the girl, and then saw the child fall to the ground, the complaint says. Pickering then raised his hands in the air and a ranger shouted to him, “Did you just stab her?”

The rangers said they couldn’t recall if Pickering answered. They say the child had a knife protruding from her chest and they tried to help the girl, but she died.

When the rangers asked Pickering why he would kill his daughter, he told them, “Now they will never be able to take her away from me. She’s happier now… it’s what she wanted,” the complaint says.

Lila Pickering was a first grade student at Johnston Elementary School in Buncombe County. Superintendent Dr. Tony Baldwin said in a statement released to the station: “While many questions have yet to be answered, our thoughts and prayers are with everyone affected by the heartbreaking loss of this wonderful little girl.”

Willis Pickering is to appear in U.S. District Court once he is transferred from state custody. State authorities also have charged him with first-degree murder.

He is being held in the Buncombe County jail. It was not clear if he has an attorney.