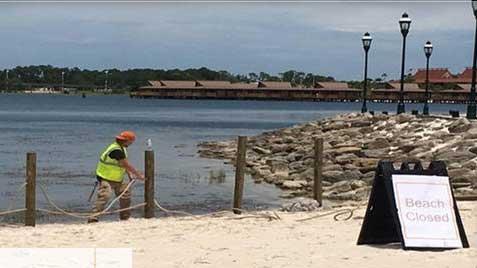 ORLANDO, Fla. (CBS NEWS) - Workers are building a stone wall around a Walt Disney World lake where an alligator killed a toddler earlier this summer.

Disney officials in Orlando said that the barrier wall is part of the new security plan following the death of 2-year-old Lane Graves of Omaha, Nebraska, reports CBS affiliate WKMG. The boulder wall is going up along the beaches of the Seven Seas Lagoon where several resorts are located.

Disney also put up warning signs and ropes after Graves was dragged by an alligator into the lake on June 14. The boy's body was found 16 hours later and an autopsy showed he died from drowning and traumatic injuries.

The family decided not to file a lawsuit against Disney.

In a statement, the parents described themselves as "broken" by the death of their 2-year-old son, Lane.

"We will forever struggle to comprehend why this happened to our sweet baby, Lane," they said. "As each day passes, the pain gets worse, but we truly appreciate the outpouring of sympathy and warm sentiments we have received from around the world."

Disney World president George Kalogridis said in a statement the company continues to provide support for the family.

Authorities say an alligator pulled Lane Graves into the water June 14. His father said a second alligator attacked him as he tried to save his son.

Lane's body was recovered the next day, and an autopsy showed he died from drowning and traumatic injuries.

After Lane's death, Disney World made changes to limit possible visitor contact with alligators on the property.

Rope fences with netting were installed around some waterfront areas, and "No Fishing" signs were installed. Fishing at Disney World was changed to be limited only to excursions.