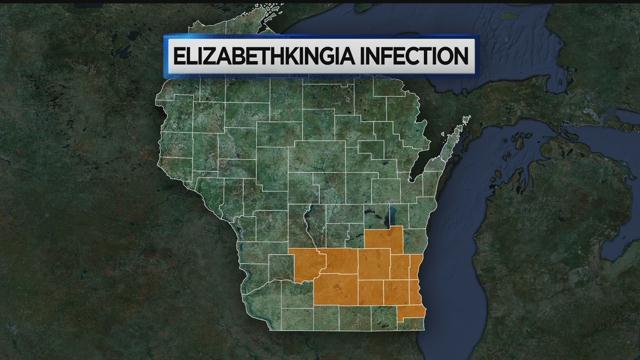 The outbreak of a new and rare bloodstream infection has infected more than forty people in the state.

Elizabethkingia anophelis, is a bacterial bloodstream infection that affects the respiratory tract. The Wisconsin Department of Health Services released details on the outbreak Wednesday.

Stephanie Smiley, the Director of the Bureau of Communicable Disease says they are taking the situation very seriously. Smiley says once the department was notified of a possible outbreak, they put their disease detectives on the case.

According to Smiley, the disease detectives are "working extremely hard" to find out more about this rare organism. The detectives are looking for the source of what causes the bacterial infection, notifying hospitals of the best treatments, and guiding health professional on diagnosing Elizabethkingia.

The symptoms of the infection are fever, shortness of breath, chills and cellulitis.

The Department of Health Services stresses the infection mostly affects those 65 and older suffering from at least one other significant illness. Smiley says people that are relatively healthy shouldn't be too concerned.

Eighteen people that tested positive with Elizabethkingia have died. Health Services doesn't know yet whether it was Elizabethkingia or another illness that caused death.

CBS 58 reached out to the American Red Cross and the Blood Center of Wisconsin to find out if blood donation supply will be affected by this bloodstream infection.

The Blood Center of Wisconsin says there is "no immediate threat to donations... but we're aware of the situation and area monitoring what's going on."

They ask donors to arrive healthy and notify Blood Center workers of any illness they may have.

The Red Cross said in a statement:

"The American Red Cross is dedicated to providing the safest, most reliable blood products possible to patients in need.

We test for a number of blood-borne infectious agents that have been shown to be transmitted through transfusion. Our testing detects these agents if present in a unit of donated blood. Additionally, all units of platelets are tested for bacterial contaminants to reduce the risk of bacterial septic events and recipient complications.

Elizabethkingia is not usually found in humans but it has been responsible for a number of hospital infections, in common with other bacteria found in nature.

We are not aware of any evidence that Elizabethkingia bacteria have been transmitted by blood transfusion or that they have been found during routine platelet testing.

As part of our screening process, we only collect blood from donors who are healthy and feeling well at the time of donation. We also provide a call back number if the donor develops any symptoms of an illness or infection within the next several days following donation. Donations from such donors are not used for transfusion.

Donating blood is a safe process and people should not hesitate to give or receive blood."