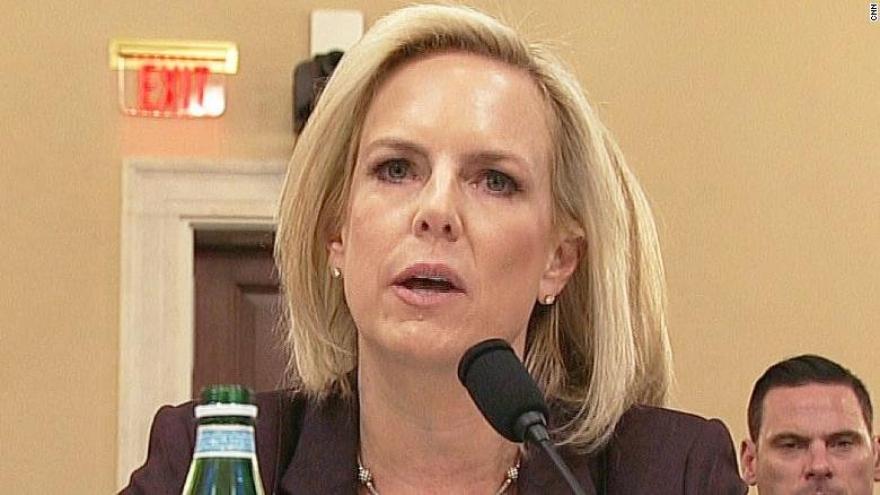 "Secretary of Homeland Security Kirstjen Nielsen will be leaving her position, and I would like to thank her for her service," Mr. Trump tweeted Sunday. "...I am pleased to announce that Kevin McAleenan, the current U.S. Customs and Border Protection Commissioner, will become Acting Secretary for @DHSgov. I have confidence that Kevin will do a great job!"

Nielsen tweeted late Sunday that she has "agreed to stay on as secretary through Wednesday, April 10th to assist with an orderly transition and ensure that key DHS missions are not impacted." Her departure is a part of a massive DHS overhaul engineered and directed by top Trump adviser Stephen Miller, according to a senior U.S. official. It's unclear whether Nielsen is deciding to leave voluntarily, or whether she has been pressured to resign.

But Nielsen's tenure since she was confirmed in December 2017 has at times been rocky, with the president taking some of his frustrations over illegal immigration out on her. Questions about whether she might leave have swirled for months. But she was by the president's side on Friday in Calexico, California, as Mr. Trump pushed for a crackdown on illegal immigration and the need for a border wall.

"This afternoon I submitted my resignation to @POTUS and thanked him for the opportunity to serve in his administration. It's been an honor of a lifetime to serve with the brave men and women of @DHSgov," Nielsen wrote in her resignation letter, which she tweeted Sunday evening. "I could not be prouder of and more humbled by their service, dedication, and commitment to keep our country safe from all threats and hazards."

Nielsen's announced exit comes two days after Mr. Trump announced he wants to go in a "tougher" direction in his nomination for the Immigration and Customs Enforcement (ICE) director, after originally announcing Ron Vitiello would head ICE. Nielsen's departure also means acting heads will soon be running DHS, the Pentagon and the U.S. Department of the Interior. Nielsen has also been one of only four women serving in Cabinet-level positions in the Trump administration, the others being Transportation Secretary Elaine Chao, CIA Director Gina Haspel and Education Secretary Betsy DeVos.

One U.S. official told CBS News is it unlikely McAleenan would be nominated as Nielsen's permanent replacement. It's unclear whether he would have to resign as CBP commissioner to take the job, and whether the line of succession at DHS would even allow for such a personnel move. Those legal issues would need to be sorted out.

McAleenan has worked as CBP commissioner since the early days of Mr. Trump's administration, keeping a generally low profile. In a 2018 interview with the New York Times in the height of the concern over family separations at the border, McAleenan called Mr. Trump's attempt to halt the separations with an executive order an "important recalibration."

In recent days, Mr. Trump has threatened to shut down the U.S.-Mexico border or slap tariffs on cars made in Mexico coming into the U.S. if Mexico and Congress don't fix the situation at the border.

Nielsen became known for her vigorous defense of the "zero tolerance" policy resulting in family separations at the border, blaming Congress for a "loophole" in the laws that needs to be fixed. Nielsen claimed in a White House briefing last year that the administration was merely continuing a policy from "previous administrations" that mandates separating a child who is "in danger, there is no custodial relationship between 'family' members, or if the adult has broken the law."

"As long as illegal entry remains a criminal offense, DHS will not look the other way," Nielsen told reporters at the time.